Hack and slash fans, get your clicking fingers ready because another Sacred title is on the way for 2013.

Deep Silver announced the first details this week for the third game in the popular Sacred series. This actually makes two Sacred games that are on the way as we already knew of one game to hold the name on the horizon in the more action oriented Citadel, but Sacred 3? Oh that’s gonna be a true return to form. 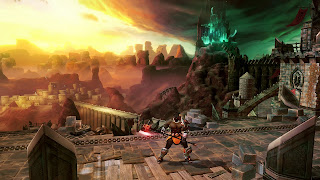 A straight-up action/RPG, Sacred 3 promises four player co-op action against the evil Ashen empire- as well as each other.

They say that whoever possesses the Heart of Ancaria will decide the fate of the world. Zane Ashen, ruler of the corrupt Ashen Empire, will do everything in his power to obtain the Heart; however, the Seraphim have hidden it away in a secure and secret place. Only when a group of heroes combine their powers to oppose Zane Ashen’s reign of terror does the world have a chance of escaping utter destruction.

Up to four players can join the battle against the Ashen Empire in a unique and engaging co-op mode in which they will not only fight against the Imperial aggressors but also compete between each other in friendly rivalry. Are they as skilled as their friends in the use of their character’s talents? Can they surpass their companions’ accomplishments in battle?
Players can choose between several character classes – the Safiri Warrior and Ancarian Lancer being just two of these options. Each of these classes offers a specific skill set – players must choose their Combat Arts, perks and equipment wisely in order to stand a chance against the Ashen Empire.

Deep Silver promises the game will have varied settings with different regions, climates, and enemies. A good chunk of the game’s world should be familiar to players who’ve stuck with Sacred since the beginning too, as locations like Castle Braverock return in crumbling and destroyed states.

Have to say, even in a presumably early state, S3 is looking very good. I’m loving the fact that it’s got a good amount of color and the mix of outdoor environs and dungeons looks like it keeps Sacred apart from the doom and gloom of Diablo to some degree.

Video: Five great Nintendo Wii games you might have missed (Part One)