Dead Island Riptide is gnashing its teeth and getting ready to bubble up from the surf sometime next year. New screens, info, and a very cool preorder bonus after the break.

If you played the original Dead Island, then you know the setup: lush tropical setting, zombies, mutants, melee combat. Techland’s zombie hack’n’slash broke onto the scene with one of the most memorable trailers in the history of gaming. The title did a lot right aside from the eye-catching video though, and it was one of my personal favorite games of 2011.

Dead Island Riptide, the sequel, was announced at this past E3 and is already looking pretty sharp. Publisher Deep Silver just released some new screens for the game as well as some new info detailing not only the story and new gameplay elements (which sound really cool BTW), but a new game mode that combines tower defense with Horde-mode style play.

Having survived the ordeals of the zombie infestation on the once beautiful island resort of Banoi, our group of survivors thought they had finally found a safe place to escape from this terrifying nightmare. But they were wrong. Shortly after the battle-hardened team had landed their helicopter on a military ship, a furious storm hits and havoc quickly spreads on board. Suddenly they find themselves struggling for their lives again with all hope drowning in the rising waves.

It sounds like weather plays a huge part in things this time around. Large areas of the islands are now flooded and the action that takes place in the city of Henderson and the jungles of Palanai will be of the maritime variety as boats will be the only way to travel in these locations. Weather conditions will be constantly shifting too and Deep Silver says to expect “changing visibility conditions”. 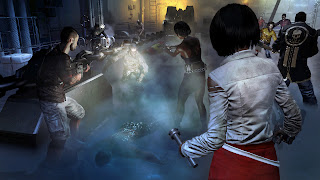 There will also be a fifth playable character (who’s still under wraps) with a brand new ‘skill set’ and “new and unknown zombie mutations” running wild all over the former paradise.

Players can also expect “hub defense missions” in the game. Cooperative teamwork will be key in these scenarios as you’ll have to build up defenses (fences, traps, turrets… you know, the usual) to protect survivors locked away in safehouses. To that end, there’s also going to be new communication features in the co-op mode that should make coordination an easier affair.

Dead Island Riptide is expect to arrive on consoles and PC sometime next year, but you can actually preorder the game now- and you’ll even get a nice little early bird bonus for doing so. Deep Silver promises that there’ll be more incentives announced leading up to release, but if you bite now you’ll be able to snag an extremely limited edition steelbook for your trouble.

You can preorder now at GameStop, Best Buy, or Amazon now.

The Sunday Board Game: Lords of Waterdeep