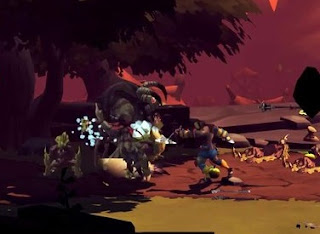 Sacred 2 is one of my favourite Diablo-clones ever. It was a massive game that you could easily spend hundreds of hours in.

So Sacred Citadel immediately caught my attention. After watching the reveal trailer I must admit my emotions ran the full range. Initially I was a little disappointed that the game has lost the epic feel, and is no longer a Diablo clone. Instead this is an action-heavy side scrolling game now.

But then I realised “hang on… this looks really quite cool.” Now I can’t wait to play it. Have a look at the trailer yourself and tell me this doesn’t look stylish:


For more info see the press release below:

Three warriors unite against an evil that threatens to enslave the once peaceful world of Ancaria. Lord Zane’s Ashen Empire has created an army of Grimmocs, modified Orc henchmen at war with the Seraphim. Only when these heroes unite and use their skills to support each other they will stand a chance!

Deep Silver today announced the side-scrolling action brawler Sacred Citadel, a new standalone title that is set in the rich universe of Sacred. Sacred Citadel will reinvent the familiar arcade feel of classic brawlers while setting a new standard for the future of side scrolling hack and slash games.

There are several playable character classes, such as the Safiri Warrior, the Ancarian Ranger and the Khukuri Shaman, each with a different skill set that can be further individualized through RPG features and collectible items. Each character will also have the ability to dual-wield two exchangeable weapons, use combo attacks and perform double jumps. All of which combines into a fluid and unique arcade game experience with sophisticated graphics and spectacular effects. The player will also be able to ride mounts, use war machines and spend his hard earned cash in towns all over the world of Sacred Citadel.

Sacred Citadel will also offer an engrossing multiplayer mode: as up to three players can join forces against their enemies in seamless drop-in/drop-out coop mode.

The events in Sacred Citadel will act as a prologue to the next chapter of the Sacred story and will unveil an intriguing secret about the Seraphim that will directly relate to the action RPG Sacred 3, currently in development by keen games and to be released in 2013.

Sacred Citadel is being developed by Southend Interactive.