There is a certain “sweet spot” when it comes to difficulty in video games. If the game developer can make the player fail a-dozen-or-two times before succeeding, the game ultimately delivers a grand sense of accomplishment without severely punishing the player for attempting the challenge in the first place. Lots of old video games were very close to this sweet spot, but succumbed to unrefined mechanics that subtly wasted the players time. And with more modern games becoming multiplayer-focused, or easier in order to compliment more cinematic campaign modes, there have been very few games that hit the difficulty sweet spot. Thankfully, They Bleed Pixels is one of the few games that aims for that sweet spot and successfully nails it.

They Bleed Pixels comes to us from Spooky Squid Games, with specially crafted music from DJ Finish Him (real-life name being Shaun Hatton). Being Spooky Squid Games’ first commercial game, it has chosen to make a platformer with one-button combat controls that advertises itself as being Gothic, despite the actual game wanting more to do with the Cthulhu Mythos, than anything Gothic. Ignoring this slight flaw, this is Spooky Squid Games’ first game to show that it can do more than make freeware games and it hit it out of the ballpark.
They Bleed Pixels does several things absolutely right in order to achieve the difficulty sweet spot, with the first of those being the enemies. There are a total of four enemies within the entirety of the game, with each of them being effectively designed to fit specific roles. It also helps that the enemies are not just dim-witted cretins; even the lumbering husk-like enemies attack the player. What really makes the enemies great is that each of them can easily be defeated in specific ways. In conjunction with the level design (more on that later), this makes the game challenging because the enemy arrangements are akin to the likes of those found in the Serious Sam titles, of all things. Thankfully, They Bleed Pixels is not as keyboard-grinding as Serious Sam is. 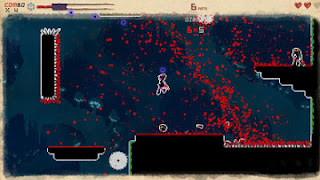 As was stated, the combat is solely based on one button. While it is awkward at first, it does get easier to use as time goes on. Based on the state of the directional pad and the position of the character, the player will perform a different actions. A perfect example is the difference between kicking and stabbing. If the player is standing still, the character will kick an enemy. If the player is moving forward, they’ll end up stabbing enemies. Once mastered, this system provides flexibility to the combat and most importantly, it’s entertaining.

On the subject of level design, the levels are spectacularly executed. Other than starting with difficult platforming concepts a bit too early (e.g. triangle jumps, etc.) and getting a bit dick-ish with enemy placement in the later levels (e.g. fighting fast, disappearing enemies while wall-jumping), the levels always present the player with new challenges and each one is fairly unique, despite taking the start-level quotes a bit too seriously into consideration. However, some of the end-game levels occasionally give up the design philosophy of fun and instead go for outright difficult level design. Granted, if you’re into difficult stage design you will love these bits, but to me they just felt hard for the sake of being hard.
While it won’t be everyones taste, the music is crafted very well. DJ Finish Him essentially made good electronic music, but slightly lowered the track volume and softened the notes so that the music doesn’t become annoying over time. Occasionally the music goes unnoticed, but that’s due to the game having sweet-spot difficulty that requires the full attention of the player, rather than the music being soft. Overall, the music is quite good and there is always the option to turn if off and play your own music.
While the game does have brilliant enemy design, a solid one-button combat systen, a quietly superb soundtrack, and, for the most part, great levels, there are a few criticisms that can be thrown at the game.
The first criticism is the story, which really is not as bad as the “criticism” label makes it out to be. The few cutscenes do look very pretty, but they only serve to move the vehicle of the game forward. The story also does not go beyond bad stuff happening to a girl in a creepy nursing-home-esque place, and even then it is not as disturbing as that description could be interpreted as.

The second criticism is the checkpoint system. Instead of a standard system that involves getting to a certain place before the game autosaves that position, the game instead opts for a system it calls “Save Sigils.” An on-screen metre fills as points are acquired from killing enemies and the player can place a checkpoint where they desire once filled. Upon death, which happens quite often, you’ll immediately time-warp back to the last save sigil placed. While it’s a new system and one that does encourage strategic playing, it can also leave the player in unsatisfactory places at times. What also doesn’t help is that save sigils are set by placing the character into a neutral stance. While the transition from starting to cast a save sigil and starting to move is fairly quick, there were a few times where I died specifically because the game attempted to cast a save sigil while I was still in the process of clearing a room full of enemies.

The last criticism is the lack of options, but this is more due to an unfortunate series of events. Originally They Bleed Pixels was planned to release during Microsoft’s 2012 incarnation of Summer of Arcade, the yearly event where Microsoft releases several high-profile Xbox Live Arcade games. However, Spooky Squid Games was later diagnosed with the Microsoft-hating bug that plagues other indie developers (examples; Phil Fish/Polytron, Mommy’s Best Games, Binary Tweed, etc.) and suddenly decided to release the game on Steam instead of Xbox Live, giving Microsoft the shaft. However, the game definitely shows that it was built for a console: limited display options, with no ability to change resolutions and somewhat ironically, the only controller that the game recognizes is an official Microsoft-licensed PC controller. Yes, it is one of those games that requires you to break out JoyToKey, but since the game is not resource-heavy, it’s very possible to run the game with other programs in the background.
However, those criticisms are small when the game hits the difficulty sweet spot. Add in great level design and They Bleed Pixels is a game begging to be played by those who want a platforming challenge.
– The V8 Ninja

The weekend discussion: What are your “next generation” gaming desires?