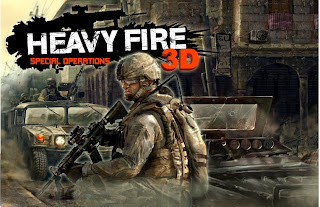 Call it a guilty pleasure, or whatever you’d like, but I’m a fan of the light-gun shooters that have come in the recent motion controlled era.

Heavy Fire: Afghanistan on the PS3 with Move was a flawed, but fun change of pace from all the modern-day shooters that have come along since the original Modern Warfare, with its on-rails approach. It was also a big leap forward from the lacklustre Heavy Fire titles found on the WiiWare service. Sadly, while Heavy Fire: Special Operations 3D gains a nice 3D visual effect, the gameplay falls back to the lacklustre days of old.

Looking through the eyes a U.S. Marine solder, you ride into the heart of the battle in the Middle East with guns blazing on top of a Humvee. Enemy combatants run at you with their AK-47s spewing lead and your sole objective is to stay alive. But it’s just that which becomes the problem here, as you can only take five hits per level and an overly stiff challenge finds frustration quickly building within minutes of starting the game. Even as an extremely experienced gamer it took me numerous retries just to make it through the first level alone. With no checkpoints, med-packs to replenish health or adjustable difficulties to be found, the fun factor takes a hit far too quickly here. 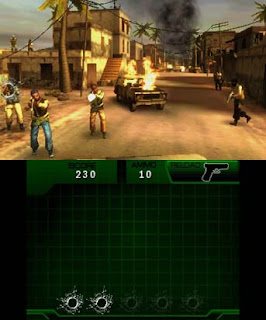 If you stick it out and fight your way through the first level, you’ll earn yourself a wad of cash to purchase new weapons or upgrades with. Larger clips, faster reloads and automatic fire are essential to success, and once a level is completed in the campaign you can replay it over and again for additional funds to unlock even better weapons and upgrades. But even with the enhanced arsenal, the challenge doesn’t ease up a bit. Each of the six levels will need to be (frustratingly) replayed multiple times over to learn the enemies’ patterns to complete them.

One thing that can’t be said about Special Operations is that the difficulty comes from the controls. Sliding the stylus around the bottom screen controls an on-screen cursor on the 3D screen, with firing and reloading mapped to the L-button and circle pad, the controls feel instantly natural, and are a fun, yet reliable alternative to the light-guns that are primarily used for on-rails shooters. Fans of Kid Icarus: Uprising (3DS) will know that this control method wears on your wrist during extended play sessions, so if you’ve got a stand for your 3DS, its use in encouraged. 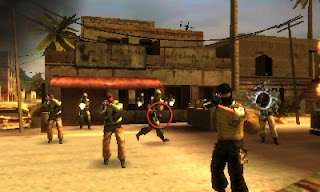 Sadly, it’s mostly all downhill from here. The muddy graphics don’t showcase the power of the 3DS very well, even though the added 3D effect brings a nice sense of depth to the title. The high action found on the PS3 just doesn’t make the transition here; opting to use the standard methods we’ve played over and again for decade’s ad nauseum:  clear a few waves of enemies and more forward, rinse and repeat. With minimal sound effects and onscreen action to be found, there’s little to keep you coming back for more, especially when you consider that online leaderboards are nowhere to be found – something that would have added a huge amount of replay value with the high degree of difficulty at hand.

Heavy Fire: Special Operations 3D soldiers its way onto the 3DS eShop with guns blazing. Even though the stylus controls bring a fun approach to the on-rails gameplay that’s found here, the gun jams a bit too quickly after stepping into the heat of battle. Poor level design and questionable options and settings mar what potentially could’ve been a fun little eShop title worth grabbing with its cheap asking price. Sadly, this operation just isn’t worth enlisting in.
– Chris I

Matrix Games’ Legion marching on to the iPad