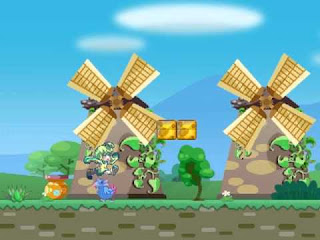 Player expectation in video games is something that is rarely toyed with. While a game may be filled with many story twists and turns, most games do not surprise players through gameplay alone. Rarely do linear/scripted games surprise players through more than a story or a musical cue, with horror games being one of the few exceptions due to their nature. While it is sad, but there have been a sub-genre of platformers that do this almost perfectly, donning the name “Platform Hell”. Eryi’s Action is such a platformer and does succeed at surprising the player, but it the game fails as a platform hell game.

Looking at Eryi’s Action from its individual aspects, the game is at worst and at best unimpressive. The gameplay is a slow-paced platformer which touts jumping on, throwing, and being killed by various enemies and objects. The visuals, while nice and aesthetically pleasing, do not rise to the level of becoming eye-candy. The sound is easily the weakest part of the game, with only a handful of generic music tracks and generic sounds. However, the game does not want to wow you with gameplay, make you rethink “pretty”, or assault you with an beautifully-organized orchestra. 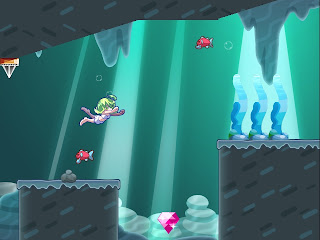 No, Eryi’s Action wants to see the player die hundreds of times. The level design within the game contains some of the most cruel tricks I have seen within the platforming hell genre; invisible blocks over pits, hidden enemies, warping the player to death-rooms, unexpected changes in object and enemy behavior, and false win states all have their time and place in the game. Above everything else, I applaud Xtal Sword for creating what is essentially a rogues gallery of every platforming hell trick in the book.

However, these tricks are structured within the levels such that they can be overcome upon their first or second or third activation. Essentially the tricks are themselves one-trick ponies, meaning that they do not induce as much rage as other platform hell games like Kaizo Mario World and I Wanna Be The Guy. However, this brings up its own issue. 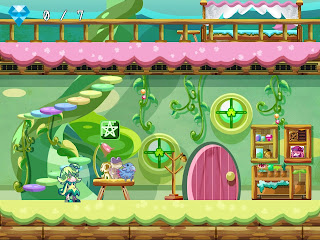 The problem is that without the endless challenge those tricks normally produce, the Eryi’s Action does not become challenging enough to satisfy what appears to be its intended audience. Coming back to the subject of Kaizo Mario World and I Wanna Be The Guy, those two games are crushingly difficult thanks to their intention of wanting the player dead and their lack of holding back on that promise. However, Eryi’s Action does hold itself back when it comes to being absolutely cruel, making the game easy for those gearing for their next nigh-impossible platformer.

By all means, Eryi’s Actions failure does not mean that the game is bad. I enjoyed it myself quite a lot, but when a game does such specific things that makes itself want to join a category which it fails at fitting into, I cannot help but criticize that those elements were not needed. Of course, the argument that a game exhibiting the cruel tricks in platform hell games but not destroying the souls of the player can be made and I would absolutely recommend this game to those who are looking for that specific request, but Xtal Sword could have focused on more fun level design rather than being cruel if they were not going to go all-in with the proposal.
– The V8 Ninja

The PSN Update is an epic loot grab

RAW is the Xbox Live Update