Nintendo’s digital services have no shortages of puzzle games. In fact, there’s so many that it takes something special to make a new entry in the genre worthy of gaining attention. UFO Interactive’s Balloon Pop Remix has just recently puffed its way onto the 3DS eShop, bringing a new rendition of the classic bubble popping theme. Its colourful presentation and cheerful atmosphere are perfectly fitting on Nintendo’s handheld, making it one of the few puzzle games that can stand out from the masses and is definitely worth taking a look.

As a Bejewelled fan, the common “match 3” approach to the genre is a natural fit for me and one I’ve grown very fond of over the years. If you’re in the same boat, be prepared to retrain your brain. Instead of sliding one coloured balloon over to match 3 (or more) colours to burst them, here you can “pop” balloons of any colour, regardless if they’re matching sets or not. The spaces left in the wake of the popped balloons are then filled as the balloons in the lower line(s) rise – digital helium at its finest.

It’s here that you’ll want to create your matches, as they’ll open up another gap to be filled, bringing along the possibility for massive continuous combos. But, matches and combos also refill your mana gauge too, which slowly trickles down as time progress, or else it game over. Mana isn’t only a timer; it’s also dictates how many balloons can be popped simultaneously. Want to take the risk of popping 5+ balloons and wiping your mana metre in half for huge combo potential? The risk is yours to take. 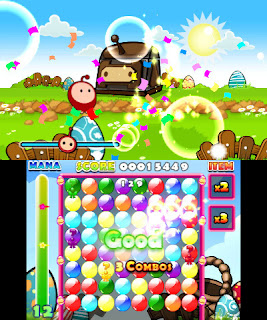 Surprisingly, there’s a charming little tale weaved into the main gameplay mode. A cute little alien has crash landed on Earth and by keeping the mana metre filled he treks along on the top screen until he finds another needed part to fix his broken spaceship. The larger the combos you achieve, the faster he progresses forward, occasionally stopping for an intermission that’ll have you trying to pop a set amount of balloons of similar colour within a strict time limit. If you manage to do so, you’ll be treated to one of the many assortments of hats to dress your alien up in the game’s other modes.
Speaking of these, there’s a Puzzle Mode and Endless Mode to keep the balloon popping coming long after the story mode is completed.  Puzzle Mode brings a nice strategy element to the table, as there are 100 pre-set challenges that limit your moves and force you to think ahead to wipe the entire board of balloons with the least amount of pops possible. Endless Mode is self-explanatory and is perfectly fitting for this type of gameplay. The only thing that’s lacking here is an online leaderboard. While the gameplay at hand is loads of fun, if I could challenge my friends’ scores, I don’t think I could stop popping once I got started.
As if the gameplay wasn’t good enough, the visuals and sound are icing on the cake. While not as sharp as many HD puzzle games on the market today, the vibrant colours still bloom off the screen beautifully here. The smooth visuals and great 3D effect on the top screen that find the little alien playfully wandering along contrast nicely to the puzzling madness taking place below, while the upbeat carnival-like tunes keep your spirits high — even when the tension builds from the warning siren of a low mana gauge that lets you know your once mistake away from being completely deflated.
Balloon Pop Remix floats its way onto the 3DS eShop to satiate your puzzling desires with just enough charm and character to stand out from the masses. Like most of Nintendo’s own titles, it finds a great difficulty balance that’s suitable for all ages, while offering up just enough of a challenge to keep hardcore players enjoying themselves as well. Balloon Pop Remix is a colour collage of fun and one that is perfectly fitting on a Nintendo console.
– Chris I

Video: Looking back at Super Mario Kart; the original and still the best