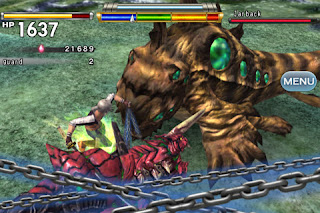 For many gamers, the iPhone (and iPad, and Android, but for convenience I’m going to just use “iPhone”) is a somewhat frightening prospect. The lack of physical buttons and the mass of $0.99 unengaging minigames makes for a gaming platform that many would rather ignore.

But in reality it’s impossible to ignore the inevitability – a significant portion of the games market, both hardcore and casual, is going to be taken up smart phone and tablet gaming in the future. This is not to predict the demise of traditional consoles, but what was once niche will become niche again – that time of mainstream popularity for games consoles will fade even as the overall games industry grows.
To start with, some numbers. The iPhone 5 topped two million preorders in the first 24 hours after it was announced. That’s almost as many PlayStation Vitas that have been sold since it was released at the start of the year. In the broader smart phone market (which is almost entirely made up of Apple and Android phones), 144.9 million smart phones were shipped in just the first three months of 2012, according to IDC statistics.
Not everyone with a smartphone plays games, but then if even a small fraction of people with smartphones play games on them, then the install base for gaming applications on smartphone is easily as large, if not larger, than traditional consoles.
This would be for nothing if there were no decent games to play on the smartphones and tablets, but as much as the traditional console fans would like to bury the head in the sand and pretend there aren’t, the reality is that there are a lot of decent games on smartphones and tablets. Publishers love the iPhone. It’s cheap to develop on (no real licensing fees, and they don’t even need to go through the age classification process that traditional games do). While discoverability is a problem for smaller publishers, the likes of EA, Square Enix and Ubisoft don’t need to worry about that. Though there’s a belief that there’s no way to sell apps for more than $0.99 on the app store, the reality is that “premium” priced content does sell.
Because publishers love the iPhone, publishers dedicate resources to game development on the iPhone. Square Enix has released no fewer than six high-quality iOS games in just the past couple of weeks. Starting with The World Ends With You, and continuing through a Final Fantasy game to some more experimental stuff like Drakerider (pictured), the consistency here is that they are premium-priced games, often exclusive to iOS, and Square Enix elected to release the games on iOS, not the PSN, and not XBLA.
On the other end of the ocean is western publisher, EA, which has an active M&A team. The constant theme for EA acquisitions? Mobile game developers. Game development takes significant resources, so when the major publishers are all investing those resources in mobile development, it’s a clear sign where the money and market interest is.
And now the iPhone 5 is coming, and for all the criticisms of it, is clearly going to sell well. It’s only a matter of time before a game controller accessory goes from being a nice novelty to seeing some real traction with the support of the big guys, and when that happens, iPhone gaming will have resolved the one criticism that is left to make about iPhone gaming.
Sony, Microsoft and Nintendo will continue to cater to their audiences, and because Sony, Microsoft and Nintendo are more interested in games than Apple, the company, there will always be an advantage there. Exclusives happen because the platform holders put money into making the exclusives happen. Apple’s unlikely to do that, so the iPhone and iPad will likely never have that AAA-exclusive like a new numbered Final Fantasy or Assassin’s Creed.
What it will do though is come to dominate the mid and low-tiers of game development. The hidden gems and cult classics will find a new home on the iPad and iPhone, and so those devices will become absolutely essential for anyone who enjoys gaming more than the occasional Call of Duty-style blockbuster.
Share this

Trailer: See lots of Totori on her Vita outing