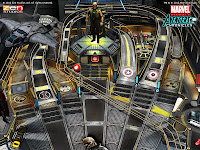 iOS, Mac, and Android gamers are in for some more Marvel inspired steelball action as the Avengers table makes its way to Zen Pinball 2.

The new table is based on this past Summer’s film of the same name and features all the Avengers characters you’d expect as well as the film’s main baddie- Loki.

Marvel’s The Avengers table reflects the events of this summer’s blockbuster film, pitting all six Avengers against Loki’s invasion of Earth. Nick Fury commands the team of Iron Man, Captain America, Thor, Hulk, Black Widow and Hawkeye, each character represented by a customized ball that echoes his or her own appearance and power set.

More Zen Pinball is always a good thing, more Marvel Zen Pinball is a very good thing. If you want to get in on all the four-colour action, a download of the Zen Pinball platform is totally free and includes the Sorcerer’s Lair table to get you started. From there you can pick and choose whatever tables you like (including The Avengers and the new Infinity Gauntlet, World War Hulk, and Fear Itself tables) individually for $2.99 USD each.

Midway Arcade Origins brings a virtual arcade to your TV