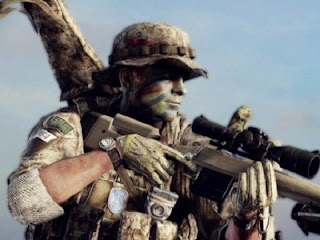 I’m a little late to cover this, but it seems that there’s a bit of an outrage about EA deciding to link over to the websites of real gun manufacturers as part of a marketing campaign for its upcoming Medal of Honor: Warfighter.

I’m baffled, and sitting halfway between amusement and despair by this outrage. I’m not sure who thought it would be a good idea to go after EA rather than the gun makers, but I’m not sure how people can be critical of a company for linking their website to another website that provides perfectly legal products for purchase.

Let’s say it again to be clear: EA has not, in any way, tied its marketing campaign into something that is illegal.

EA has made a game (a military game, no less. Those do tend to feature guns) that it is selling on the strength of its realism. It’s legally obtained the rights to use the brand name of real gun manufacturers, who are making legal products, and it decided to build a marketing campaign around an element of the game that EA believes will be appealing to a large number of consumers.

In effect, what EA has done is no different to slapping a Ferrari car on the cover of a racing game, and then linking to the Ferrari website. And yet because this is guns we’re talking about, people seem to think the rules should be different. “It feels wrong even with the understanding and acknowledgement that that there are carefully-enforced restrictions and background checks in place, or that it would be just as easy to seek out and buy these weapons without EA’s help,” Laura Parker over at Gamespot wrote.

My question to that response is simple: “since when has EA been responsible for gun control?” To make it even clearer: “these guns are legally and readily available in shops, and you’re complaining about a company writing a blog post? When we’ve had licensed guns in games for years now?”

I’m getting tired of communities and governments putting pressure on corporations to behave in an “ethical” manner that those communities and governments can’t even be bothered holding themselves up to. In an example not related to the games industry the Australian court has recently banned logos on cigarette packs. It’s still perfectly ok to buy and sell cigarettes, but if you want to promote your (legal) business? Oh no, that won’t do. People might want to do something crazy like smoke a cigarette then. A cigarette they’re legally able to purchase and smoke.

What I’m getting at here is that people need to start holding the right corporations accountable for products and services that we consider unethical. I personally don’t like guns – and so I protest the laws that allow gun companies to sell guns on the open market. I certainly don’t expect a company like EA to turn down marketing opportunities with entirely legal, legitimate businesses. If or when guns become illegal, then I’ll protest when I see EA run that kind of promotion, because it is entirely unethical to promote illegal activities.

Similarly, I hate smoking, but as long as we allow people to smoke, it is nothing short of draconian control to tell those smoking companies they’re not allowed to promote their products.

This is a free market. If you don’t like a company promoting a game with real weaponry, then go put some pressure on your government to ban the weapon. Then the promotion would stop, I guarantee it.