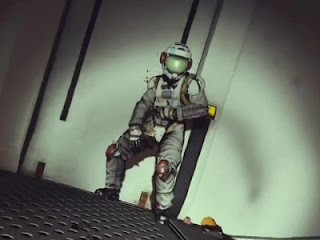 When games like Dead Space and Resident Evil have come up among gaming discussions, I have heard the term “Hollywood Horror” applied to both those titles and many more mainstream titles that fall under the horror genre.

To sum it up, the term points toward the idea that a piece of horror-themed entertainment is so staged and played beat-to-beat that said piece of entertainment ends up drowning any terrifying moments it had in its tropes. While people would argue whether or not the term applies to all mainstream horror games, few have ever argued the term applies to independently produced horror games. Some would even go far as to say that independent horror games are the last true haven for video game players who want a genuine scare. If you happen to be one of those preachers, you can continue your gospel for the time being.

Amongst all of the excitement that is taking place in Cologne, Germany during Gamescon, the 3-person independent game studio Lunar Software has released a teaser for its first game, simply called Routine. Fitting the studio name, Routine is a first-person horror game based on exploring an abandoned research station on the moon. While not detailing much, the teaser does show off some stunning visuals and is able to express a great atmosphere;

For those who are a bit more meticulous, here is the run-down that can be found on the Lunar Software website; not only has Lunar Software decided that there will be no user interface elements present in the game, but Routine will also randomize the position of hazards and useful equipment. Throwing on top of those aspects both permanent death and a completely open game world only make the game more of an alluring horror. Also, there are promises of audio logs and guns, so the game is not entirely ditching the conventions of its modern cousins.
Those who are anxiously awaiting the game will have to stay in control of themselves; the teaser only gives the vague release date of sometime in 2013 with no planned storefronts to purchase the game on. Another interesting fact of note is that Mike Gordon, the audio director for many triple-A games such as Crysis 3, Dead Space 3, and the majority of the more recent Need For Speed games, is acting as audio director on this project. The only logical conclusion to make from that last fact is that while Routine is scaring you with its atmosphere, the following sounds will make you scream and cry in terror.
Share this