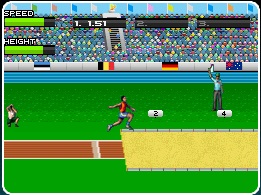 No one should ever, ever be forced to play a game as bad as Decathlon 2012. I consider myself to be a casual fan of the Olympics, so a lack of enthusiasm for the worldwide spectacle which this game was obviously released to take advantage of isn’t to blame. It’s just that to go from watching Ethiopia’s spectacular win in the women’s 10,000m to violently rubbing my stylus back and forth across the screen in an apparent simulation of a similar event is downright depressing.

While the gameplay actually becomes (slightly) more complex than that (in some of the events), what I just described to you is the basis of the ten “different” events that comprise the decathlon. Really. But in the spirit of the London 2012 Olympics let’s go through them one by one, shall we?

First up is 100m. It really does just involve swiping your stylus horizontally across the touch screen as fast as you can in order to make your runner run the 100m faster than his competitors and reach the finish line first. The only other gameplay nuance is that if you start swiping before the starting shot, you get a False Start!, which means nothing other than you get to try again.

Next we have the Long Jump. This one features the same exciting stylus slide mechanic as 100m, with the added variation of needing to release the stylus at the proper moment. But wait, there’s more! After you release the stylus, you must tap in order to long jump for big points. 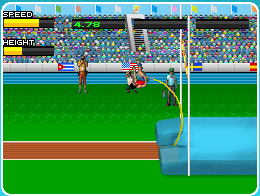 Here comes Shot Put. Wherein you put your shot by “tap tap tap”ing until you build up enough speed, at which point you slide to throw. It has the most varied gameplay so far, believe it or not.

Get ready for High Jump. Jump high by pressing “+” and “-” to adjust the height of your obstacle, slide as usual, then release like in Long Jump, and finally tap like in Long Jump for fun and profit.

Check out 110m Hurdles. It’s the same old stuff–what’s this? Now you must release the stylus periodically in order to clear hurdles in order to win in order to prove your country’s superiority! 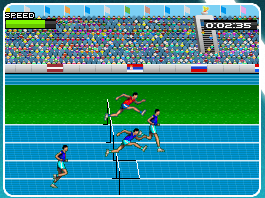 How about Pole Vault. It’s just as fun as High Jump, because it is High Jump, with more sliding!

Let’s see Javelin Throw. It combines the best of both worlds; you slide to run and slide to throw.

Last but not least, 1500m. Enjoy a fun anecdote about my experience with it: due to the “stamina makes everything more fun” rule, I soon fell behind the other runners. Rather than even attempt to catch up to them as they sped towards the gold medal, I was content to let my pathetic little runner walk to the finish line. It took ten in-game minutes, and let me tell you, it was so worth it.

If you choose to play through the entire decathlon in one sitting, racking up points and fighting for the best rank among the nations, as opposed to tackling each event individually in practice mode, a special treat awaits you. At the end, there will be a short victory animation in which the best three human-controlled (share the fun!) or more likely CPU athletes are awarded medals. The happy mood of the animation is jarring, considering how I was tired and dejected during it. But I suppose that’s accurate for an Olympian who didn’t medal watching the award ceremonies.

While I sincerely hope that you weren’t as bored reading this review as I was playing Decathlon 2012, if you were, then at least I’ve succeeded in giving you a taste of the insulting badness of the game. Watching the Olympics, needless to say, is a much better way of going for the gold.