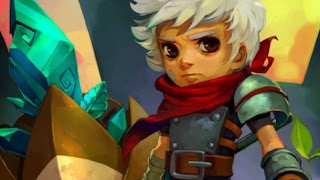 For all its accolades and reputation, Bastion isn’t exactly innovative with its gameplay systems. You’ll descend into a range of dungeons, kill enemies with a range of weapons (each with their own pros and cons), level up and grind your way to better equipment and loot. The pace of the game is reasonable, and the swarms of enemies that beset the hero are big enough that diving around and making use of the shield are essential to survival. Again, it controls tightly and it’s compelling dungeon-hacking fun, but it’s not exactly innovative.

What is innovative, however, is the presentation of the game. Bastion is, hands down, one of the greatest-looking games ever made. The art style is impeccable –it’s literally the kind of thing you would expect to see illustrating fantasy novels for children… if not in actual art galleries. The animation is spectacular. The music is awesome. 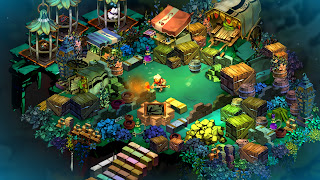 And the commentator is so good I hope other games adopt this narrative style. Yes, commentator. As the hero explores the world of Bastion, there’s a reactive commentary going on in the background that explains to the players what they’re seeing, or warning them of what they’re going to see. It’s literally the only form of plot delivery in Bastion – there’s no dialogue and the hero is largely mute. Far from being a dry reading (this isn’t a FIFA sports game), Bastian’s commentator knows how to be sarcastic (had a very good lesson from GLaDOS, perhaps?) and the dry wit fits in beautifully with the storybook-visual style. If you’ve ever been fortunate enough to watch Eurovision and listen to Terry Wogan’s commentary, you know roughly what you’re in for here.

That presentation turns what would otherwise have been a decent dungeon hack into one of the most personality-filled games I’ve played in years. The most apt description I can come up with is that the game is an adult’s take on the fairy tale. The game is snappy paced as a consequence, but this works in its favour – it’s paced so beautifully that you’ll never get a chance to be bored, and while Bastion is over in a relatively short period of time for an RPG, it leaves the kind of happy fulfilment that most longer, grind-heavy games fail to realise. 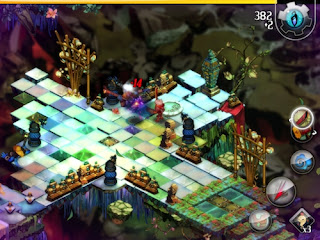 In terms of being a “mere” port to the iPad, Bastion works beautifully on the Apple platform. The virtual controls are very easy to come to grips with, and are placed around the screen in a very intuitive and ergonomic fashion. The “tap to move” controls are clunkier and those are the default, so for first time players I highly recommend changing over to the virtual stick in the options menu.

It’s been an incredible couple of weeks for iOS gaming. The exclusive Horn, followed by the superb port of The World Ends With You, and now Bastion. Given that you can buy all three for the cost of one retail game, it genuinely amazes me that people still think the device is inferior as a gaming platform.

Trailer: Paradox’s next hardcore strategy game is all about the little man