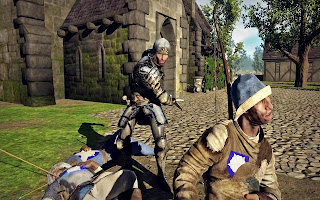 War of the Roses is an experience-gaining, melee-centric third-person multiplayer action game that borrows from history the real War of the Roses, a civil war between knights that took place between the mid-to-late 15th Century.

You have got my interest, Paradox Interactive.
Ever since the beginning of the seventh console generation, the game industry has seen what appears to be an endless stream of first- or third-person shooters. Not only that, but many of them have decided to use a dull colour palette and emphasise everlasting multiplayer modes that somehow end up not lasting at all. Because of this focus, there has been a serious lack of games that have competitive multiplayer but do not feature players running around in ruined or third-world landscapes trying to get as many kills as they can. This in turn has lead to stagnation within the competitive multiplayer scene and many players are starting to get bored.
However, War of the Roses wants to shake things up. War of the Roses presents a melee combat as the base while wrapping itself in a medieval aesthetic. Yes, there are experience points and levels to be earned much like in the other games that have contributed to the stagnation, but the sole fact that Paradox Interactive is supporting and funding a professionally polished multiplayer game that is different from everything else really makes me happy.
The base combat in War of the Roses is slightly more complicated than the average multiplayer shooter. Every player class has a melee weapon which can attack opponents in four ways; with an overhead strike, a lunging stab, or left/right broad swing. Where the player targets their attack affects how much damage is done, an example being that a blow to the head will cause more damage than a blow to the hip. Players can also defend from attacks by blocking. There are two types of blocking; shield blocking and weapon blocking. Shield blocking is a catch-all solution that blocks all frontal attacks while the shield is raised. Weapon blocking requires more refined reflexes as it operates similarly to attacking; a player can only block attacks from one of four directions at a time. This system is surprisingly entertaining, as by nature it encourages close confrontation and those confrontations do not instantly result in death. War of the Roses is a game of skill first and luck second. 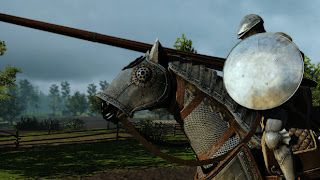 While I have nothing against the melee weapon mechanics of War of the Roses, I do have more of a problem with how those mechanics control. To start charging any of the melee swings, a player has to hold down their attack button (in the default controls this is the left mouse button) and nudge their mouse in a direction (up, down, left, or right) to execute the desired attack. However, the mouse also controls the camera by default, meaning that the player has to sacrifice their camera control for a second in order to attack other players. There are two reasons why this control scheme feels inadequate for a competitive space. The first is that during hectic moments, it is difficult to perform a desired attack without ending up performing an entirely different swing. The second reason is that the game sacrifices camera control while starting an attack and that loss is accompanied by the ability to properly line up strikes so that they can connect with opponents. While there is an option to allow the WASD-keys to determine what attacks and blocks are performed, that options brings its own problems with the biggest being that it locks the movement controls for a second. Needless to say, I wish Fatshark, the developers of War of the Roses, would add the ability to bind specific swings to keys in order to not lock controls.

Another part of the gameplay of War of the Roses is the two medieval projectile weapons. Yes, War of the Roses is not an entirely melee-centered game, but there are plenty of mechanically fair reasons as to why players will most likely choose the sword over the first projectile weapon, a bow. A bowman must accurately target their opponent while also having quick enough reflexes to let the arrow fly when the arrow has reached the anchor point. Otherwise the arrow will travel slowly, veer off into another direction, or the bowman may end up ruining a perfect shot by drawing the bow back for too long. These mechanics are entirely fair as they are disempowering to unskilled players, making only those who have played as bowman for grand amounts of time valuable assets to a team.
The last of the two projectile weapons could very well be controversial once War of the Roses becomes more public or when the full game releases. That last projectile weapon is a crossbow. The controversial aspects of the crossbow are that the weapon has very good accuracy and does not require any reflexes to perform a successful shot. All a crossbow wielder has to do is to set aside a few seconds to reload their crossbow before they have the power to launch a projectile with deadly accuracy into the back of another players skull. I see this gameplay mechanic as potentially controversial because in some of the more open levels, a team with a large number of crossbow wielders could potentially create an unbreakable defense line. (Personally I would call that ‘realism’ – ed) While I never saw any of this in the time I was playing the beta, this fictional situation could gradually escalate into a reality once more players have access to the game. 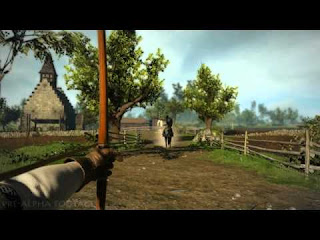 Speaking of level design, War of the Roses has some unique multiplayer arenas. The stadiums can be divided into two categories; the visually striking arenas and the interestingly designed maps. While the handful of levels I played fell into the first category, there were two levels that were built upon intelligent design. Those levels had varying pathways such that despite wearing heavy armor, players could sneak up on their enemies from behind. Those other levels, in terms of design, were a bit bland. They were wide, open arenas with few opportunities for flanking opponents. However, those stadiums sported very appealing visuals, mostly due to clever use of lighting. One of the arenas was literally an open field, but due to the flowers, the magenta rays of a sunset, and lonely trees the level became one of the most beautiful war-grounds I had ever seen in a video game.
While the game is visually interesting at many occasions, those visuals come at a cost. While I cannot say that my gaming computer is anything special, I can run most modern games at a solid 60 frames-per-second with the graphics turned to medium. However, with War of the Roses, I had to turn almost all of the settings to the lowest possible options and make sure I was not running any other programs while I played the game to achieve the standard 60 FPS benchmark. Granted, the game does look very good, even on its lowest settings, but needless to say this is not a game for those who have to lower their settings to below “High” while playing Team Fortress 2.
One aspect of War of the Roses that I am split on is the leveling system. I find gaining XP a rather good solution to the tired but still relevant problem of other players feeding off of the work of genuine players by “stealing” the kills of said genuine players. Every successful hit a player performs is rewarded with the same amount of XP as damage delivered to the opponent. This makes it so that besides blocking and walking, almost every action has some XP gain to it, meaning that players will not entirely feel “Cheated” out of XP. I also am happy for Fatshark making team revivals net a larger XP gain then executing an enemy, as that aspect improves cooperation within teams greatly. 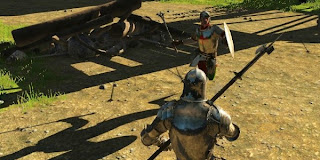 However, what I find a bit annoying is that when the player unlocks their first custom class said player will have a very small amount of options in terms of choosing their weaponry. The four unchangeable classes that they player will have easy access to do not carry anything more than a specific class weapon (bow, crossbow, or long sword) and usually a small back-up sword. While the player can choose from an extravagant array of different weapons types (including axes, lances, and pole-arms) when they unlock their first custom class, each individual weapon is locked behind different high-level requirements. For instance, while I may be able to go into the pole-arms selection menu, I cannot actually equip my custom class with any of them due each pole-arm having a different level requirement which my current level is below. Even after getting to level 9, a player still has few options for as what they want to carry into battle. I believe that not everything should be immediately given to a player very early on, but some of the weapon choices require the player to at least have a level of somewhere in the mid-30s before they can be used. I also believe that a multiplayer game should not heavily deny a player different types of weaponry and War of the Roses does this frequently enough to go against that belief.

In terms of sound design, War of the Roses is adequate at best and adequate at worst. The sounds of metal clashing with metal and swords cutting through flesh all sound like they should and to my knowledge there is only one music track in the entire game. It is not a bad music track, but the lonely track does exemplify how high on the agenda music is for Fatshark. One other aspect worthy mentioning is the announcer. When certain events occur, the announcer will say his lines and communicate the message. However, the announcer sounds like a caring but tired individual. He has enthusiasm and wants to read his lines with gusto, but he just is too tired to conjure the necessary excitement to do so. However, the narrator generally keeps quite except for at the beginning and end of matches, so it is easy to ignore him.
In all, I found my time with War of the Roses to be an entertaining melee-oriented multiplayer game, but if the game wants to prosper as a multiplayer regular the game it will have to change some aspects of itself. The control mechanism for performing swings is wonky and limiting a player’s choice of trying weapons is a bit disheartening. Otherwise, Fatshark and Paradox Interactive definitely have an interesting and fun game on their hands.
War of the Roses is currently scheduled to be released on October 2. The game is available for pre-order on Steam for the price tag of $29.99 US.