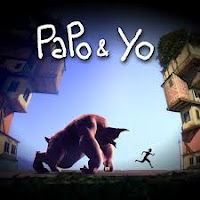 Journey into the heart of a child in this emotional PSN indie game.
Many of the world’s great musicians take their troubles in life and turn them into inspiring, oftentimes sensitive music to help soothe their sufferings. Painters craft images to tell a story that promote their world views. Writers shape words into endearing emotional dramas to help others deal with life’s dilemmas. But, what would happen if a game developer shared his trouble in light of changing the future? In Papo and Yo, we find out just this and in the same way as the other types of artist mentioned, the end result is something inspirational and beautiful, yet full of sorrow behind its veil.
The opening sequence depicts something much deeper, much darker than the surreal South American vista the game plays out in. Minority Media’s creative director, Vander Caballero, opens the game with this doleful dedication: “To my mother, brothers and sister, with whom I survived the monster in my father.” Then we witness the game’s main protagonist, Quico, tightly grasping his toy robot while huddled into the corner of his dark room hiding from the shadow of a monster raging about on his wall. While, all children are scared of the monster under their bed in their adolescent years, it’s blatantly obvious this isn’t just a childhood fright. Escaping his reality, a door magically appears on the wall before him and with his toy robot in hand, he lunges from this world and into another.
Dressed for a typical school day under the sedation of a beautiful blue sky above, we find our Quico standing in a South American favela. A young girl motions for Quico to follow suite and a playful chase ensues. Always one-step ahead, the girl stops in a small clearing between buildings and quickly draws a chalklike door in a solid brick wall and enters through – closing behind her. Looking about, you notice a small chalky handle protruding from the wall close to where she disappeared. Grasping hold and giving a tug, the wall magically starts to separate from its solid form and pulls out in the shape of a staircase. Looks like Quico isn’t the only one with powers here – maybe, just maybe he can use it to change what he desires to do so the most? 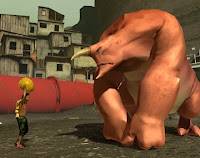 At heart, Papo and Yo is a seamless environmental puzzle. A minimalistic gameplay style allows to Quico to run, jump and flips switches with the smallest of effort from the player. While the puzzling gameplay is fun enough, it’s the sense of childlike wonder in Quico’s world that sets it apart. His toy robot rides upon his back giving him an extra boost jump with its jetpacks, as well as darting off to distant switches outside of his reach with a simple button press. While flipping switches might be old news in gaming, when you find buildings scurrying off to new destinations on little chalk legs and growing wings to fly themselves upon each other to construct a tower that puts the Leaning Tower of Pisa to shame, you’ll want to keep flipping them to see the magic they harbour.
Then we meet the beast with razor-sharp teeth called Monster. Initially terrifying in name and sight, he leisurely strolls about eating coconuts and minding his own business. Lured about with the milky treats, this gentle giant plays into the world’s puzzles. A full belly equals one sleepy Monster and his large belly can be used to trampoline to previously unreachable areas. Don’t let him get hold of a poisonous frog though, because if he does, he’ll burst into flames and become enraged – hurting anything in sight, including Quico. Monster’s addiction to the little hoppers creates intense puzzle sections within the world where you truly have to act fast and think outside the box to keep from taking a beating from the infuriated beast. Only by reaching the Shaman can Monster have any chance of ever finding a cure.
The parallels in Papo and Yo aren’t simply cast aside to its fringes; they’re clearly visible for all to see. But no amount of written words or understanding of its context will prepare you for the power of its dramatic conclusion – it simply has to be witnessed. Minority Media has something to say, and it’s profoundly touching. It’s not a technically perfect title, as there are some framerate and clipping issues scattered about, minor camera issues, and I even came across a bug that needed a checkpoint reboot to resolve. But it’s the magic hidden beneath the surface of the colourful graffiti plastered walls in this South American vista, coupled with the outstanding soundtrack arrangement of vivacious Spanish percussion pieces with scaling flutes and strings that shroud its flaws and keep you immersed in what’s most important here – the story.
Papo and Yo is full of magical wonders and amazement; it’s filled with the innocence of a playful child. Yet, behind its beauty and charm lies the dark parallels of a troubling reality. A reality that so many children are struggling with at this very moment in time – parents with addictions. While Papo and Yo is indeed a brilliantly light-hearted puzzle/platform game on the PlayStation Network from Minority Media, it’s also so much more. The maturity of the gaming industry is in full display here, as its developer gives a voice to the broken-hearted. In a world where videogames are so typically demonized at the drop of a hat, Papo and Yo boldly stands to make a change in this world – a change for the better.
– Chris I

Preview: War of the Roses (PC)