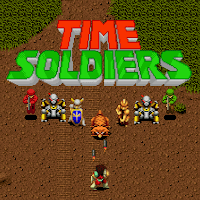 Take a trip through time and face off against belligerent Legionnaires and missile loaded Triceratops’ in this classic SNK shooter.

SNK’s Time Soldiers was released in the midst of the arcade boom of the late ’80s. Personally, I don’t remember the game, but I probably shouldn’t be too surprised that I don’t. I was pretty much a fighting game guy when it came to playing on the filthy, greased up cabinets in my local pizza joint. Shooters and action games were just barely on my radar unless they featured superheroes and/or were movie licensed.

But there are actually quite a few games that I’m just playing now as ‘retro’ titles that I missed out on back in the day. Though I didn’t miss much with a good chunk of them, some were real gems that nobody should pass on. So where does Time Soldiers fall in there? More the former than the latter unfortunately.

Here’s the thing, much like with the better known Ikari Warriors, Time Soldiers is meant to be a twin stick shooter. Quiz time: Is there a second stick on the PSP? No. Is there one on the PS3? Yes… but the game really doesn’t care for it, so as far as TS is concerned the answer is a resounding ‘no’ there too.

Now, I reviewed Ikari Warriors III a while back and it has the same setup. I have to say though, Time Soldiers doesn’t have anywhere near the charm of Ikari. So if I seem like I’ve got a bit of a double standard going on, it’s probably because I do.

So how do you control a twin stick shooter with only one stick? Easy (not really) – by using buttons to turn. If that sounds clunky, it’s because it is. The stick is used to move about and pressing L or R will turn your character left or right. Then there’s a button for firing (you shoot in the direction you’re facing) and one for special weapons. You can change this up a bit and have both movement and aiming mapped to the stick however- an option that I found to be slightly superior and easier to use.

And that’s a good thing, because this is an extremely hard game. Time Soldiers is tough as nails and you’ll find yourself dying a lot. Part of that will most definitely be because of the control schemes, but a good chunk is just plain old difficulty. One hit and you’re dead and there are a ton of baddies coming to get you from all sides- none of which seem to have any issues with turning and shooting. They’re actually kind of cool too.

One of the most charming parts of the game is actually its rogues gallery. Time Soldiers, as you may have guessed, is a time hopping title that sends your trooper through timegates as he searches for his missing comrades. You’ll go to the vaguely WWII-ish battlefields of the 1940’s, the Roman era, and prehistory where you’ll be assaulted by cavemen and some kind of bullet firing dinosaurs. Yes, the story is a pretty light one with bunches of stuff thrown in that makes no sense- but if you were playing videogames in the ’80s/early ’90s then you probably aren’t too shocked by that.

The sound design is passable in Time Soldier except for two things- the gunshots are (obviously) plentiful and they grate on the ears after a bit. That in and of itself isn’t the worst thing, but the player-character’s death scream is. Holy cow, is it horrific. Like, ear-bendingly horrific. The first time you hear it, it’s kind of funny, but by the millionth time you’re shot to death, you’ll be reaching for the volume control.

I don’t want to pick on Time Soldiers too much though because it definitely has its moments- the prehistoric stages are definitely worth a play-through. You really either love or hate games like this though and so much of what draws players in for retro releases is nostalgia. If you remembered TS in the arcades, you just might have a pretty fun time with the PSN re-release. For me Time Soldiers is unforgiving, hard to control, and just not that appealing in the A/V department.

The world ends tomorrow…With You

Preview: War of the Roses (PC)