I was a huge fan of Orcs Must Die! 2, scoring it 4.5 out of 5 stars upon release.  The game has a ton of replay value already, but Robot Entertainment has announced yet one more reason to give the game another go. 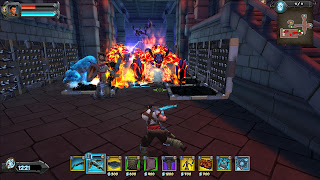 This DLC is being called a ‘booster pack’, and will release on Steam on August 29th for $4.99.

The storyline behind it:

Hellish new Fire Lords and Fire Elementals crumble when killed, leaving behind dangerous Firelings that will hunt the player down and explode when they get too close! Slippery Water Lords and Water Elementals dwindle into pools of water when killed, but don’t count them out of the fight! When Waterlings find dormant puddles, they’ll absorb the stagnant water and grow into new Water Elementals!

War Mages will have access to three exciting new traps to add to their arsenal, as well. The Web Spinner is a new wall trap that ensnares hallways full of passing monsters in a sticky tangle of webs, slowing them down to buy precious time. Ceiling Darts turn your fortress into a temple of doom for orcs, dropping from the ceiling to fire deadly darts in every direction. If the orcs make it past your defenses the first time around, you can give them another dose of pain with the new Floor Portal. Place the floor portal anywhere on the ground. Unsuspecting enemies who step on it will be magically teleported back to the beginning of the level!

And here is what the DLC features:

* New Levels to Defend – The fight for survival isn’t over yet! Battle your way through three exciting new levels in single-player or co-op – Traffic Jammed, Double Decker, and The West Wing.
* New Endless Mode Conversions – Think you’ve mastered Endless Mode? Think again! The Fire & Water booster pack features three new Endless Mode level conversions to hold your ground on – The Library, Double Decker, and The West Wing.
* Terrifying New Enemies – Prepare for a whole new challenge when you face off against the harrowing new Fire and Water Elementals!
* Exciting New Traps – Add some deadly new defenses to your Spellbook with the Web Spinner, Ceiling Darts, and the Floor Portal!
* New Bonus Skull Definition – Can you hold the invading monsters at bay without traps? Prove your mettle by playing exclusively with weapons and you’ll add another bonus skull to the pile at the end of each level.