Billed as “the ultimate Battlefield game pack”, Battlefield 3 Premium Edition will hit this Fall and be prepped for battle with the complete ‘Premium’ load out.

If you’re new to the franchise, look no further because this is the version of Battlefield to pick up. Included with the base Battlefield 3 game are the five themed digital expansion packs and a Multiplayer Head Start Kit designed to get noobs into the fight with ease. 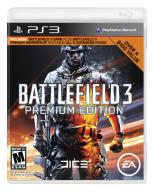 All in all a very solid deal with a lot of extra goodies for just ten bucks (USD) over the game’s original asking price of $59.99 Battlefield has gotten a lot of positive word of mouth (as well as critical acclaim) for its expansions as well as its multiplayer gameplay. On a personal note, while I’m not the biggest multiplayer fan in the world, I know a few Call of Duty fans that prefer B3’s multi over MW3’s, so they must be doing something right.

Here’s the breakdown of what’s in the box:

Look for Battlefield 3 Premium Edition to deploy on September 11th in the US and the 13th in Europe for the Xbox 360, PS3, and PC.
Share this