Publishing giant EA announced at Gamescom today that its upcoming C&C Generals 2 will be folded into a new online, free to play ‘platform’ called Command & Conquer.

EA will “spearhead the industry’s digital revolution” with the new platform in 2013. Generals 2 will be the game at the forefront. The title will be the first game in the franchise to be offered on the service, with expansion into the franchise’s other universes promised in the future.

“We are thrilled about this opportunity to transform Command & Conquer into a premier online experience,” said Jon Van Caneghem, VP/GM at EA. “For nearly two decades, this franchise has existed as something you buy; now we are creating a destination where our fans will be able to access the entire Command & Conquer universe, starting with Generals and continuing with Red Alert, Tiberium and beyond. With Frostbite 2, we are able to keep an emphasis on the AAA quality our consumers expect while staying true to the RTS gameplay they know and love – all available online for free.”

Frostbite 2, FYI, is the engine that’ll be used to run Generals 2. 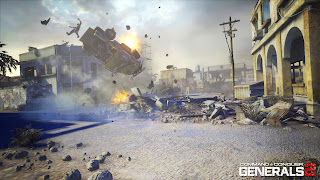 The publisher is claiming C&C games that post to the platform will indeed be full on “AAA strategy” games “for free”. I assume that means a complete multi as well as single player experience will be offered. If that’s the case, does this new free to play system mean that the C&C series will be exclusive to the online platform? And just how do micro-transactions (somethign that the company left off of the press release) fit into everything?

The fate of future retail (and digital standalone) releases is a little unclear at present as well. But in any event, you can expect to see Command & Conquer to go live sometime next year with a closed beta starting up soon. You can get in on that pre-release version by going to www.commandandconquer.com/free and signing up.