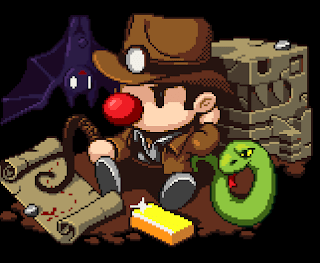 I’m still working through Spelunky to review it. I want to give the game a fair go, and true to reputation, it’s beating me raw, so I’m not getting very far. I’m not even that good at the easy platformers. At this stage I’m not quite sure if I’ll ever play enough to be able to critically review the game.

When/ if that review comes, the game will get a very positive review and score, as I do believe that it’s a well made little game and while that difficulty will be off-putting for many, it’s the kind of game that develops a very faithful community. That said, I’m going to say this: I, personally, hate this game. If I was a victim in a Hostel movie, playing this game would be the way I was tortured. I haven’t wanted to break a controller in a game before, ever, but Spelunky had me winding my best baseball pitching action.

I’m going to use this as an opportunity to get up on one of those soapbox things and say: yes, I get that Spelunky is retro-flavoured right down to the core, but as authentic as it is, there are elements of game design that are best left in the 80s. We’ve developed better approaches to difficulty, for one thing.

For a game with a rogue-like approach to death (ie, back to the start, lose everything), a game that deliberately throws death traps that are unavoidable the first time you encounter them is not good game design – it’s a cheap and nasty trick to make the act of getting to the end of the game hard. That technically qualifies as ‘high difficulty,’ but it’s a literal definition of the phrase. There’s no real challenge in learning through failure. That’s rote-learning and a frustratingly unreasonable way to pad out what is a very short game.

It’s not that I’m against difficult games – I love Demon’s Souls and Dark Souls, but there’s a difference: the Souls games are challenging. Demon’s Souls is a cruel game, but ultimately it’s a fair one – there’s few, if any, moments of “Surprise! Bang! Dead!” Almost every time when my hero was run through by a demon or took a diving lesson off a cliff face I felt that it was my fault that he perished. And, as hard as Demon’s Souls is, it’s also not so brutal to reset you to the start every time you do die. At times it’s slow progress, but the point here is that every step of the way there is genuine progress in a Souls game. Where a Souls game rewards perseverance and problem-solving, Spelunky simply throws you into another unavoidable meat grinder.

Other modern difficult games share similar traits to the Souls games – they’re not fearful of being overwhelming, but at the same time they present solutions to players who are quick-witted enough to think through the problem. The difficulty in modern games comes from presenting players with what essentially amounts to complex puzzles. Retro (and retro-themed) games are difficult for a very different reason – they’re a test of reflexes and pattern memorisation.

So I guess what I’m saying here is I prefer games that are difficult by being mentally stimulating. Spelunky hasn’t stimulated me and it’s artificially difficult, and as such I hate this game.