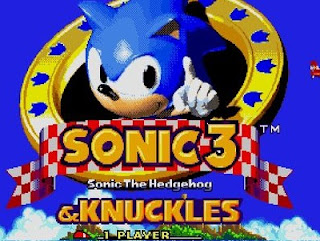 For all the critical acclaim Sonic 3 & Knuckles gets, it’s a surprisingly hard game to track down digitally. The separate games that comprise the said title, Sonic the Hedgehog 3 and Sonic & Knuckles, aren’t always available on the same download services or lack the technology required to make the games a cohesive package. The Steam release stones two birds by releasing both games as one for the cheapest price available.

To give you a brief synopsis, these two titles were released individually in the 90s. Were you to merely switch cartridges after beating the first game, you would lack all sorts of features. If you had them both together, though, you could combine them into one “super” game that pushed the tech of Sega’s old machine.
And boy, it is a super game. It really only builds upon the premise established by its predecessors, but the execution is golden. At first glance, it appears to be exactly the same as Sonic 2. All the same speedy 2D ring-collecting action is in full swing once again. However, it’s the inclusion of subtle changes like elemental shields, mid-air jump attacks, and bonus stages that set its mechanics apart. The level design itself is also far more varied, featuring a healthy balance of level-specific gimmicks and traditional speed. Occasionally, you’ll even get to see minimalist cutscenes play out (don’t worry, there’s never any dialog).
Further differentiating it is the ability to pick between Tails, Sonic, Knuckles, or a Sonic/Tails combo, each boasting their own differences in gameplay. Sonic is the fastest but he’s ground bound, Tails is slower but can fly, and Knuckles can glide and hang onto walls. The Sonic and Tails combo is perhaps the best for inexperienced players as it offers the opportunity to score free hits against bosses and a second player can assume the role of Tails for co-op action. It would have been impressive if you could assemble any team from the three, but at least it makes sense considering Knuckles’ rival status in the storyline.
The game features around 25 single player levels with a boss at the end of each, so you should be getting more than enough value for your money. In case that’s not sufficient, there are several two player stages as well. These play out exactly like the main game, just with a second player competing via split-screen in a more competitive fashion. To further the game’s range, these multiplayer stages are all unlike from their single player counterparts.
If there’s one thing fans of the past games should worry about, it’s the special stages. These levels house the Chaos Emeralds, which are powerful jewels that transform Sonic into Super Sonic and allow you to view the game’s true ending. The first and second Sonic games had special stages that, even though they could be challenging, were at least easily accessible. Sonic 3 & Knuckles instead has you search through the levels to find a hidden entrance to the special zone and once you arrive…oh man. You’re tasked with collecting every single blue sphere (typically 100+) in a pseudo 3D environment. Touching just one red sphere boots you out and Sonic’s speed gradually increases to make turns more challenging. If you want to become Hyper Sonic (Super Sonic’s superior form), you’ll need to beat no fewer than 14 of these exceedingly tricky stages, which may cause the impatient types to go bald.
Underscoring the whole experience are smooth visual design and a stunning musical score. The former has undergone a mentionable upgrade since Sonic 2. It now sports some of the best optical grandeur on the Mega Drive, including a more refined sprite for Sonic. The soundtrack is chock-full of memorable songs from the opening Angel Island Zone to the later, more rocking Flying Battery Zone. Believe it or not, we actually owe Michael Jackson some thanks for this one.
Aside from the game itself, the Steam release has some of its own nuances. Chief among them is the obligatory save state feature that enables you to temporarily or permanently suspend your progress at any point in the game. This is particularly useful for those malevolent special stages. There is also an option to smooth out and enhance the visuals. Many players have (understandable) reservations about such graphical enhancers, but I do feel this one actually adds a layer of polish to an already striking game.
The simplicity of Sonic 3’s control scheme also means it’s a joy to play on a keyboard if you lack a gamepad. All you need are the arrow keys and one button for everything else. You may even be able to sit a second player down beside you if your keyboard is spacious enough.
Sonic 3 & Knuckles was already a fantastic title in its heyday, but the Steam release is head and shoulders above the rest. It’s also undemanding to run and should work on any remotely modern computer, regardless of its gaming incompetence. Topping it all off is the cheapest price point yet. Why not take it for a spin…dash?
-Clark A

Why I hate Spelunky: artificial difficulty vs. genuine challenge

Summer of Arcade kicks off on the XBLA update