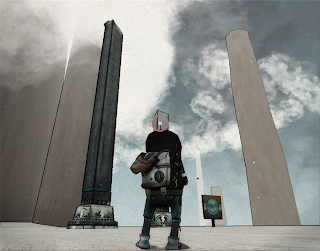 I am standing on the edge of a cliff, gazing into a desert abyss. I have been scaling a giant, ancient statue that represents all that remains of a long lost civilization that worshipped a magical pair of underpants, and my mission is to reclaim this priceless relic from some guy known as Big. I am a nerdy inventor named Tiny, and that meanie Big has stolen my Grandpa’s Leftovers.

With a ridiculously epic indie rock soundtrack pounding in the background, I continue to scale this mountain of a statue, not really caring at all about getting those pants. I’m not in it for seeing my journey’s juvenile, paper-thin story through to the end. I’m playing for the joy of discovery, for the adrenaline rush of exploration, for that feeling of entering a new world and having amazing adventures in it. I am playing Tiny and Big: Grandpa’s Leftovers because I want to get lost in a video game, and escape to a universe that is more fantastic and surprising than our own.

What I just described is the experience you’ll have fleetingly during your time with the game. The vast majority of the time you’ll be thinking that Tiny and Big hates itself and you even more. 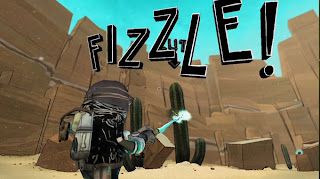 I say this because Tiny and Big is a victim of basic design failings that do a huge disservice to the many things the game has going for it. For one thing, it has an amazing cel-shaded art style ripped straight from a graphic novel. It has the aforementioned “too good for a video game” soundtrack that is, well, the best I’ve ever heard in a video game. You actually have to collect each track in order to listen it as you play, which adds an innovative layer to the proceedings.

The main mechanic is your character Tiny’s ability to cut virtually any object in the game in half using his laser. If that sounds quite impressive, that’s because it is. Laser-cutting is a gameplay hook rivaling the likes of Portal’s…portals and Quantum Conundrum’s dimensional shifting.

Armed with your trusty laser, as well as a grappling hook and a device that allows you to attach rockets to any surface, technically you possess the tools to overcome any obstacle that the harsh desert throws at you. Although there are no enemies to kill – just some adorable little creatures that hide underground, waiting for you to sadistically crush them – there are plenty of pesky rock formations to impede your progress and some seemingly insurmountable mountains to climb. 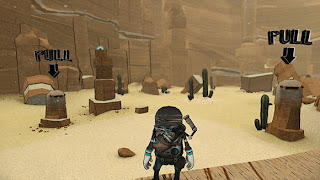 This is a world waiting to be shaped, or so Tiny and Big’s trailer boldly proclaims. What it doesn’t tell you is that the game’s ludicrous checkpoint system will do everything in its power to prevent you from realising your world-shaping dreams. Never mind the fact that a game like Tiny and Big even has a checkpoint system. In this world, any amount of progress can be undone at any given moment due to a laser cut gone wrong, a misplaced jump over a minuscule and invisible gap, or most annoying of all: Big chucking giant rocks at you until you die dramatically.

Mere words cannot describe the crushing disappointment of building the ultimate staircase to the heavens or collecting countless “boring stones” (yes, that’s the in-game collectible) and “tapes that play music,” only for some precariously placed rock to suddenly decide to crush you to death. Tiny and Big’s most rewarding moments are completely overshadowed by absurd checkpoint placement (why you can’t just press a button to save I have no idea), and the end result of this is almost every play session ending with you hating Tiny and Big right back, sadly. 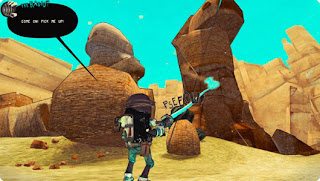 So Tiny and Big is a massive disappointment, then. A game that has so, so many things going for it only to be held back by terrible design decisions is bound let the player down. I would say that it’s still worth playing the game, though, to see not only what could’ve been, but what could still be. Grandpa’s Leftovers is only Episode 1 of the epic Tiny and Big saga, after all. If Black Pants Game Studio goes back to the drawing board and either allows the player to save at will or is at least more forgiving with their checkpoint placement, they could have something truly special.

That’s not to say there isn’t something special here already. Buried deep within the game lies a sense of adventure and exploration that is every bit as visionary as inspired as the original Legend of Zelda. Despite the story being fairly childish and generally making little to no sense, the atmosphere and universe are so well-realized that while playing you will truly feel like you are discovering a forgotten civilization and are on a journey as epic as ever seen in the medium of interactive entertainment. That, combined with a soundtrack for the ages, is a sight to behold.