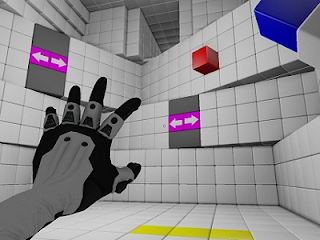 Q.U.B.E. frustrates me. Not because the game is bad; the game is actually a very well-constructed puzzle-platformer with a few irritating challenges, but besides that there is nothing quite wrong with the game. What frustrates me is that Q.U.B.E. wants to be more than what it actually is; a fun, filled-with-ideas puzzle game.
Let me describe the set-up for those uninitiated; the title is an acronym for Quick Understanding of Block Extrusion. The game performs the act of block extrusion (and a few other tasks) by giving the player two magic gloves. The left glove extrudes blocks from a wall while the right glove intrudes blocks into a wall. The three basic types of blocks are red blocks, yellow blocks, and blue blocks. Red blocks can be extruded from a wall a total of three times with each time making the block longer, yellow blocks act as stairs with the specific block that is extruded being the longest, and blue blocks act as launch-pads when they are intruded. There are different types of blocks introduced later on but none of them intrude or extrude, slightly skewing the title acronym.
Being a puzzle game, Q.U.B.E. has two distinct types of puzzles; puzzles where the objective is to move yourself towards the exit and puzzles where the player has to move one or more objects into specific positions in order to open the exit. The game starts its first few puzzles by solely sticking to the “Get To The Exit” puzzles and later on introduces the second type of challenge. After about a quarter of the puzzles have been completed, the game starts throwing in a combination of the two types of puzzles and those additions to vary the game in a strong enough way to make the entirety of the challenges well-rounded. Besides one sector of the game where puzzle elements are obscured from the players sight and a series of puzzles revolved around magnetism, I cannot say anything bad about the puzzles except that they not executed to the level of perfection.
Now at this point you are probably questioning why Q.U.B.E. frustrates me. I have already stated that the puzzles are done well and I have given no indication that the mechanics of the game are executed poorly. In fact, I believe that the mechanics are executed very well in terms of not making the player feel cheated and/or make them feel at the mercy of an unknown entity. What I feel Q.U.B.E. fails to do is to present itself in the way that it should be. 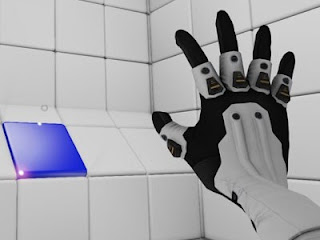 Now, if you have been paying close attention to what I have written, you will notice that I have not mentioned anything relating to the story of Q.U.B.E. That is because the game does not have a story. However, the game thinks it has some sort of story to tell. Throughout the game there is a large amount of uncontrollable cut-scenes. The game starts itself with an uncontrollable cut-scene that seems to imply that there is a reason why you are in the situation that you happen to be in. There is even an unexpected turn of events about half-way through the game, which leads to more discoveries being made. However, the game never comments on any of these things and leaves them where the game put them. As some of the puzzle elements are based off of these discoveries and vice-versa, it is almost impossible to solely focus on the puzzle elements and ignore the weak story elements the game presents.
Now, to make my point a bit more understandable, I want to mention Q.U.B.E.’s most prominent comparison but for a completely different reason besides gameplay. The idea of completing puzzles in a first-person perspective that Q.U.B.E. presents is very similar to Valve’s own Portal game. However, unlike Q.U.B.E., Portal presents a narrative that functions very well. The narrative in Portal justifies most of the details included within the game, such as why there are no other beings except the player and a robotic voice, why the game is structured in a test-by-test fashion, and why the facility looks old. In Q.U.B.E., there is no in-game justification for any of the elements in the game, which makes for a very weak narrative.
Because Q.U.B.E. has such a weak narrative, I wonder why Toxic Games, the creators of Q.U.B.E., even bothered to have a narrative at all. It’s not like the game requires any sort of story to establish the environment of which it inhabits; the game has the style of a bunch of cubes pasted together. It would have made much more sense to simply make the game level-based where new levels unlock by playing other ones accessible through a menu rather than trying to weave them together in a sort of campaign the game cannot support.
In all, I find Q.U.B.E. to be a, as I stated, frustrating game. The reason for my frustration is that the game has good puzzles that are fun to figure out, but strings them together with a vapid and almost non-existent plot that has no goals and no drive to explain what anything is or means. I can only recommend this game if you can entirely ignore the story of most other games and if you want a fun first-person puzzler.