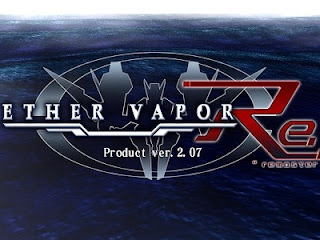 Ether Vapor Remaster probably doesn’t look stand out much against the vast array of 2D shooters these days. Glance at the screenshots and you’ll see what appears to be a generic fighter plane taking on the usual host of other aerial mechs. However, it’s far more innovative than its appearance would have you believe – it packs perhaps the most inventive premise I’ve seen in the genre for years.

When I say “2D shooter”, of course, I’m referring to the sub-genre that has emerged from the shadows of space shooters: bullet-hell games. Rather than sticking to a slower and more refined pace, bullet-hell games crank up the amount of enemy fire on the screen to absurd proportions. Much of your gratification stems from finding that sweet spot to take cover in while the rest of the screen is bathed in enemy fire. Using subtle taps of the buttons, you can manoeuvre your character to victory. Ether Vapor follows this formula to a tee, but that’s not important.
Rather, the key factor here is what it does differently. Whereas many titles are simple horizontal or vertical affairs from start to finish, Ether Vapor is far more ambitious. Some stages will be played in a vertical top-view of the ship whilst others are played with a horizontal side view. Occasionally, your ship will fly all over the place in a cinematic style while you control a cursor instead of the ship and its normal firepower. Best of all, most levels combine all three of the perspective changes in a cohesive manner, which makes for a type of gameplay that’s largely untapped. On the off chance you found yourself falling asleep at the wheel in other shooters, this formula makes for constantly engaging action. 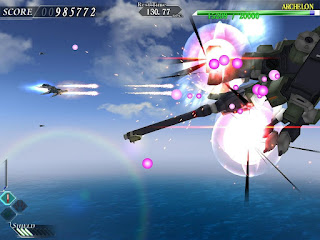 Ambition has a price, however. Since your play style is constantly changing with the camera, you need to adapt to how the rules function in the other perspectives. For example, one boss early on has a laser beam that moves around with 3D depth, despite being locked on a 2D plane. You can dodge the beam by going “behind” it, yet you can’t go behind the boss itself – slightly confusing since the boss is flying all over the place in 3D. It’s not anything game-breaking, though, and you’ll likely begin to grasp the ins and outs before long. Besides, this is a bullet-hell game – you’re going to be replaying it many times over.
Speaking of which, the game packs an admirable amount of options for extending the typically short length of games in the genre. You can unlock a new plane, new modes, and various option tweaks that alter the experience. There’s even an online leaderboard for the especially hardcore players. While there are only seven shot “scenes”, they’re infinitely replayable.
As far as bullet-hells go, Ether Vapor is reasonably challenging. The difference here is that it can be made accessible to newcomers that are willing to endure several game overs. As you play through the various modes, you’ll “unlock” the ability to use more continues and increase the amount of damage your ship’s shield can sustain. This is an interesting way to go about difficulty, since it encourages the less skilled players to actually try and develop some skill rather than just crank up all the options from the get-go. You’ve got to earn your ability to slack off, if that makes sense. 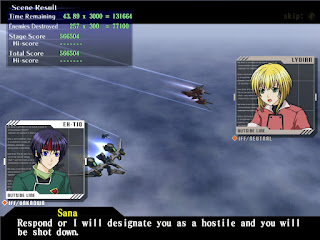 The game also has a plot, but it’s hardly integral to the core experience. In fact, it’s entirely removed when playing on the remastered edition. It follows the exploits of Luca Earlgray, a pilot looking for revenge on the nation of Caldea. He’s the stubborn type and insists on taking the Caldean forces down by himself. During the end of a level or prior to a boss encounter, you’ll get to read banter from the characters he battles. The plot is never fully explained in-game, but it becomes increasingly easy to grasp as you progress, so there’s not much need to look up a summary. As far as narratives go in shooting games, this one is surprisingly pleasant.
As I alluded to earlier, the game’s chief issue issue lies in the visual aesthetics. After a while, you’ll find that the scrolling backgrounds start to conflict with the colour of enemy fire on certain levels. This makes it vexing to concentrate on dodging, since you can’t keep track of everything on the screen very well. Disregarding that complaint, though, Ether Vapor does look far more graphically advanced than many games in the genre. This is especially noticeable when playing the cinematic portions of the game, which show off some very respectable textures. The remaster does wonders for an already solid-looking game.
The soundtrack clearly had more work put into it than the bullet colouring. It boasts an ensemble of upbeat, yet calm tracks. For such an intense game, there’s a strange sense of casualness to the whole thing, which makes for an inimitable mood.
Ether Vapor Remaster isn’t without its share of problems, but it’s able to overcome them thanks to an inventive gameplay twist. It’s also a decent starting point for those unfamiliar with the genre, assuming they aren’t turned off by the occasional cheap death.
-Clark A