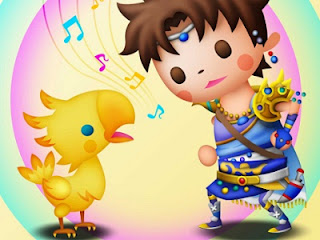 I’m a big fan of Theatrhythm. It’s a game project with a lot of soul, and reviews across the board – mine and the response on Metacritic has, so far, been very positive indeed: 80 aggregate score from critics, and 97 from users (at time of print).

As a games journalist, naturally I’ve been clicking around the Internet reading various responses to the game. A common response was “but the DLC is so expensive!” It’s an attitude that concerns me greatly, as I believe it represents a tension between gamers and the businesses that make the games that is quite destructive.

To give some context: Square Enix will be releasing DLC for the Theatrhythm, to the tune of around 50 songs, at around $US1 a track. This is on top of the 77 songs that are already built into the game. Buy everything, and you’re looking at around 127 songs for the price of a budget-priced game (at least, in Australia, it’s $20 less than the usual 3DS retail price), and $50 for the DLC.

That does price the entire package as significantly above the price of a normal game, yes, but the content more than compensates – you’d need to two Just Dance games to get the same number of tracks in a music release, for instance. Buying them both new, at launch, would have cost more, so gamers are actually making some savings here.

On top of that the price of Theatrhythm’s DLC is roughly equivalent to the price of a Rock Band DLC song, or indeed a music track from iTunes. I felt Square Enix was being fair – generous even – with the DLC policy for this game. There’s still 77 songs in the basic retail game, after all, which is above and beyond most rhythm games, and the game doesn’t try and push DLC on players, either. It’s simply there if they want it to extend the longevity of a long game even further.

And yet, it’s become a point of criticism – certainly not as vocal as the day-1 DLC controversies that, say, Capcom experienced with its Street Fighter games, but there is a definite sense of disappointment about the overall price of buying everything this game will offer.

To me, when a game as pure in intention as Theatrhythm to be exposed to this kind of controversy (and make no bones about it, this game is a thank you note to the Final Fantasy faithful), it represents a core tension in the games industry that bubbles under the surface: no one really thinks about it, but gamers don’t really like the idea of supporting the developers or publishers. Handing over money for content is not something people want to do, but rather it’s something they grudgingly have to do. It’s almost like the price of games is a punishment, rather than the mutual exploitation that a capitalist system is meant to operate under.

The problem lies on both sides of the fence. Developers and publishers are doing a very poor job of articulating value to the consumers, and this is something that needs to improve, and dramatically quickly. DLC, especially, needs to be positioned as a reward for dedicated gamers, and not merely another way to make money from people. But, at the same time, when consumers start to voice disappointment in handing over $0.99 for additional content for a game they really enjoy, there’s a fundamental problem in customer attitude.

The reason Theatrhythm is such a good example for expressing how toxic this “it should be cheaper” attitude is because this isn’t a case of being able to dismiss the DLC practice as “dodgy” or “exploitative” with bad DLC. Extra Final Fantasy music for a game that you are playing because you like Final Fantasy music? How can that be a bad thing? Nor is it a case of the developer being greedy – no one has criticised the amount of content that is “on cartridge” for a very good reason – it’s huge.

No, the problem is far more fundamental than that, and it’s not even related to DLC – this is an industry where the market doesn’t like the providers being successful. While this is true to an extent with all industries (we live in a capitalist world, after all. Greed is a given – including greed from the consumers), I’ve found the games industry to be especially aggressive.

Businesses try to aim for cost-to-revenue rations of 35-40 per cent or thereabouts. Most games businesses wouldn’t even be close to that. Consumer’s don’t care about how healthy their favourite companies are, though, until it’s far too late. In the meantime, it’s still a problem if a developer or publisher tries to increase the margin on a game, or protect itself from second hand sales. DLC is still a considered to be a bad thing by many gamers, but DLC is all that’s keeping some of them afloat.

This is a very difficult industry to do business in. Surely if you like games, then trying to support the industry is better than resisting it? Or, in other words: if you like the game, it really isn’t healthy to complain about forking over $1 for a bit of DLC that you want anyway.

I’d like to hear everyone else’s thoughts – why do you think there is a significant population of gamers out there that resist supporting their industry? And, what is the solution, do you think?