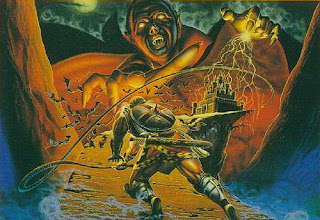 Here it is. Quite possibly the most reviled Castlevania game of all time (yes, even more than that woeful fighting game, or the terrible Nintendo 64 games), Castlevania Adventure, has arrived on the Nintendo 3DS eShop Virtual Console.

Perhaps understanding just how bad the reputation for this game is, it’s a dirt cheap download, too. So here’s the thing: for that price, I had a great time.

Castlevania was one of my very first Game Boy games. As a youngster when I unwrapped my console one Christmas I had Super Mario Land, Tetris and Shanghai to play. Immediately falling in love with gaming (this was the first console of my very own, too), I saved all of my pocket money (allowance, for our American readers) for weeks to get a new game. I finally had enough money, and my eye was immediately drawn to Castlevania when I walked into the shop.

I played that game to death (after all, I didn’t have a huge range of games to compare this to). It tickled my imagination with the earnest attempt to put a gothic world on the Game Boy’s limited hardware, and it was certainly challenging enough. So I got my money’s worth, and nostalgia has been kind to my impressions of this game.

Of course, I’m older and wiser now, and it took all of ten seconds with the Virtual Console version of this game to realise that it’s really not a good game. The Belmont hero-character controls like a tank, can barely jump, and moves slow enough that a glacier would likely out run him. There’s a substantial delay from pressing the “whip it, whip it good” button to actually whipping something, and given the enemies are often far more mobile, this means often Mr. Belmont takes a whack.

And the first level includes the most painfully cruel platforming sequence I have ever experienced.

So, just in case I wasn’t clear enough before: this is not a good game. But here’s why I love it. The level design itself is actually quite good. There’s plenty of variety of environments to explore, and though this is a linear game there is the occasional secret area that houses a real treasure trove.

The music is also quite superb. The first level’s theme song is still one of my favourites across the entire franchise.

And, finally, it’s a genuinely hard game. Yes, part of the difficulty is thanks to the shocking controls, but that’s half the story. The other half is that this game is difficult because it throws genuinely challenging situations and environments at the player. It’s almost a puzzle game at times – making do with limited capabilities to get through the room’s nasties.

So I have a fonder view of this game than many. I wouldn’t necessarily recommend it, but for $Aus4.50, it’s not a purchase I personally regret.