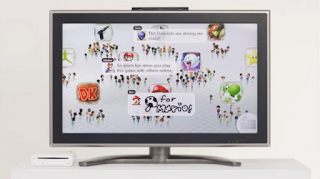 Two interesting bits of news regarding Nintendo’s upcoming Wii U platform and its online and social structure hit the news feeds today. And I am not amused.

The first is that friends codes will return. Nintendo of America managing director, Reggie Fils-Aime, has promised that the system has been revamped and improved, and now a limited form of communications is possible with people that you haven’t exchanged friend codes with. The problem is that, like the boy that cried wolf, I think many of us are now sick of Nintendo’s promises to improve things. The 3DS’ Friend Code system was, in reality, the barest of improvements over the Wii’s system, and messaging/ game finding is still a clunky, unintuitive way to do things.

It is frankly amazing that despite openly acknowledging that people do not like friend codes that Nintendo persists in using them. The excuse that it’s family friendly is a pointless one, since the system doesn’t really protect children from the virtual nasties out there, and a well-implemented parental controls system, such that Sony or Microsoft offer, is enough to allow the adults to enjoy an uninhibited online experience.

The second is that there is, apparently, not going to be a console-wide achievement system with the Wii U. Nintendo claims that the Wii U will use the same “achievement” system as the 3DS – and that seems to mean the activity log, but not a Gamer Score or trophy system.

Both approaches demonstrate a resolute stubbornness on Nintendo’s part to stick to what it thinks it knows best, rather than follow market trends. Normally I’d say that is admirable, as I’m not generally a fan of developers and publishers giving in to public pressure when it would compromise their product vision. But these two examples are neither. Getting rid of the friend code would simply be acknowledging that in the world of Twitter, Facebook, Pinterest and PSN/ Xbox Live the idea of firstly exchanging codes, then both inputting the codes just to communicate is an outdated way of doing things. It fell out of fashion with MSN Messenger years ago.

The achievements debate is even simpler – it’s a completely harmless option that gives a large number of players a kick. It’s getting to the point where all platforms offer achievements in some fashion, and Nintendo is going to look decidedly archaic without a proper system in place.

I have high hopes for the Wii U, but these promises that Nintendo is making that its online infrastructure is improving is starting to sound frighteningly like the promises it was making that the 3DS would offer a better online experience. While it may technically be true, the Wii U is going to need more than a technical improvement to offer even the minimum acceptable standard for online experiences in the next gen.

What we should have been hearing from Nintendo is Twitter and Facebook integration – screenshots and online video streaming, retail game downloads and other social features. Instead we’re hearing, once again, how they’re updating friend codes and not doing achievements. This is evolutionary, not revolutionary, and the Wii U needs to be a massive improvement over the Wii and, yes, 3DS if it wants to be competitive once the PS3 and Xbox 360 hit the market.

All we’re getting right now is promises.