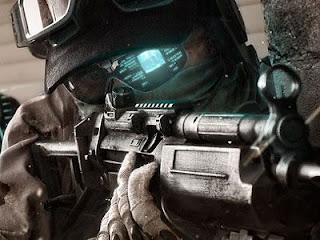 Tom Clancy has always appealed to me as a FPS franchise, in much the same way James Bond does. Like a big, brash, American version of Bond, Tom Clancy tales have it all – counter terrorism, stealth, exotic locations. The alcohol might be a little different – Tom Clancy heroes are more about beer than martinis, but the concepts are similar.

For me the benchmark of the series is the Splinter Cell games, which focus on the stealth and have a fairly non-linear approach to objectives. The modern shooter however, doesn’t gel so well with the hallmarks of a good Tom Clancy story. Travelling from one shooting gallery to another offers up some explosive thrills, but lacks in the subtlety that makes a strategic action game great. James Bond games have struggled with that disconnect, and Tom Clancy games struggle with it too.

Tom Clancy’s Ghost Recon: Future Soldier is not really different in that it, too, struggles with the disconnect between what Tom Clancy stories want to be, and what the modern shooters are popular for. But as a shooter it must be said that Ubisoft have done a fine job in finding ways to keep the action varied and reasonably strategic, while not veering too far away from the proven commercial formula. The result is a game that should appeal to most gamers, even if it’s not going to land on too many “best game ever” lists. 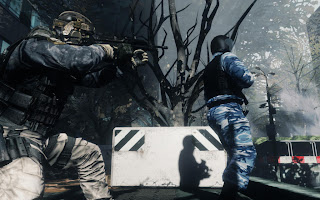 Let’s talk about the single player game first. Like the best modern shooters it’s a little briefer than we would like, and heavy on the action and scripted moments. As befit its AAA-status though the game is remarkably tight and well scripted. Guns have a nice heft to them, and the movement is slick while feeling just abstract enough to allow players to feel like the powerful super soldier. Battle for survival this game is not.

As I feared going into the game the corridors-and-firefight-room structure is firmly in place in this game. The first few missions of the game follow the same basic structure – run down a claustrophobic path, take cover, take down the goons. Later on the game opens up a little in the sense that the firefights become genuinely challenging – especially on the higher difficulty levels – and it’s not enough to act as a lone soldier. In Future Soldier, you’re in command of a unit, and you’ll need to make sure the (fairly competent) AI allies are moving into the right strategic positions to cover one another and create deadly crossfires for the enemies.

It might lack subtlety, but it’s the kind of strategic variety that keeps the action fresh and interesting. Each of the firefights end up acting as self contained little puzzle boxes and, action context aside, I’ve not been quite as engaged on a mental level with this generation’s shooter since the rather brilliant Operation Flashpoint. So yes, hats off to Ubisoft for working within the commercial constraints of the shooter genre to try and give people something that’s at least a little bit different. 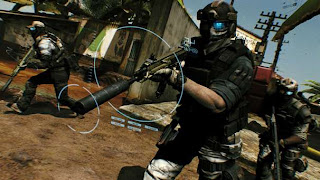 This all falls to pieces in the multiplayer, though, which I found to be completely, soul-crushingly bog standard. Aside from the shift from first person to third person, this is an exact replica of every other shooter multiplayer mode since Call of Duty became standard. There’s levels, classes and loadouts to earn, and as is traditional, those who have had grinded up the levels have a marked advantage over those new to the game.

To take a moment to go on a tangent rant here: developers, for the love of God please figure out a way to reward your dedicated players while not completely alienating the newcomers. It’s fine that you want that level 72 player that has chewed out 300 hours in your game to be a God soldier, but you still need to make the game compelling for me, that level 20 upstart. And no, it’s not much fun to sink 50 or more hours into your game only to realise that I really know nothing – that, ladies and gentlemen, is intimidating. 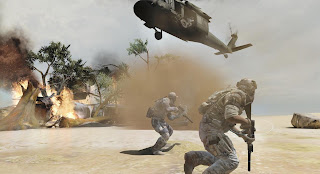 The battlefields have been all balanced in that nice way that ensures no one feels like they’re at a terrain disadvantage. It’s deathly boring and completely sterile, but it allows for people to feel like they’re being treated “fairly.” The same basic team tactics are at play here, with the same basic strategies working. And, like every other shooter out there, it’s populated by utter morons that are probably not old enough to be playing these games.

Now all this is still a reasonably compelling formula – between the single player game and the standard multiplayer I haven’t had the time or inclination to try out anything else in this game – but it’s compelling because all the shooter developers out there have all got this formula down to a fine art. There’s nothing to really distinguish this multiplayer mode from anyone else out there on the market at the moment, aside from a neat stat tracking app (which really should be standard as games with multiplayer modes, it helps engagement with the game significantly). It’s also way too late for a game that adheres so carefully to this proven formula to pull anyone away from their existing shooter of choice.

While it’s impossible to criticise the game for what it is – it’s almost faultless in execution, I’m going back to play Birds of Steel, which is a military action game that genuinely does something different with the same basic shooter structure. Anyone who is still enjoying the genre should get something out of this – if nothing else, the single player game is fresh enough to be worthwhile.