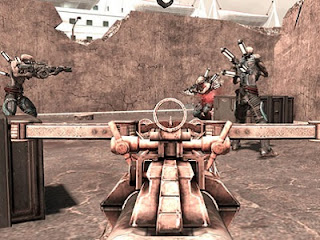 While I remain a great fan of the PlayStation Vita, even I’m starting to wonder when the games are going to start coming. There’s a lot of potential in the hardware, but since the spectacular launch, the disappointing sales figures seem to be keeping the developer community away. Sony even kept the console right off centre stage at E3.

So, when a new game is released for the platform, Vita owners are interested by default. Resistance, as a franchise with a well-established name, could have been the first weighty FPS to start carrying the Vita into the mainstream. It doesn’t, but it does show that with a bit more refinement, the Vita can indeed do the AAA-grade games.

Resistance, though, is a game restricted on budget and ideas. It follows the FPS formula religiously with tight, linear corridors and large-scale firefights. That bit is not the problem, because the shooting controls are actually nice and tight. The problems lie with the controls elsewhere. Ducking behind cover and popping out to fire off a few bullets is easy enough to execute, but poking the head out from around a corner to take a bad guy out is a painfully clunky process. Furthermore, each gun has a secondary fire feature that requires the use of the touch screen. The problem is, if I’ve already got both thumbs working the dual sticks, how exactly am I meant to use the touch screen? It’s these little oversights that I don’t expect from the eventual Call of Duty Vita game. 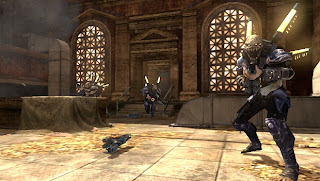 A special call out has to go to the occasional chase sequence, too, which is genuinely painful. When there’s little room to make mistakes and an unbeatable evil chasing you down, it’s entirely possible to miss-tap the run command, and then it’s back to the last checkpoint to repeat the sequence. It’s frustrating when death happens as a result of poor control layout, no?

The problems carry through to the multiplayer, which is nothing more than a scaled-back shade of the full console experience. Credit must go to the developers for coming up with up to 8-player battle, and aside from some difficulties in getting a match going, the multiplayer games themselves run smoothly. There’s the usual levelling and weapon unlocks, and a range of customisable loadouts to let you pick your preferred combat style. The problem is that the maps are small and rather devoid of life, and the gameplay options are thin.

Worse, the balance is somewhat out because respawns are poorly handled. Nothing is worse than giving an opponent a killstreak by respawning right in front of them… with your back turned. It happened multiple times to me. Some neat Near features, such as gifts for double experience, help to encourage you to come back and play again, but I never personally felt the need to play more than one or two games at a time before switching back to something more engaging. 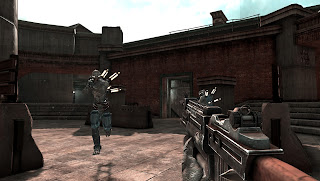 Perhaps corners were cut in development to get the game out on time and within a fair budget for a game released to an underrepresented console, but if there was a strong vision behind the project, that would have been forgivable. Unfortunately Resistance has something of an idea behind it, but doesn’t execute well on it. Taking control of a Fireman from half a century ago, you’re tasked with fighting off an overwhelming alien invasion. So far, so good. There is plenty of scope there for having to make do with inferior firearms, minimal weaponry and desperate situations, but within five minutes you’ve picked up a bit of futuristic weaponry from an alien corpse, and from that point onwards the setting is rendered redundant.

It becomes a standard shooter then, with some halfway interesting weapon upgrades and some somewhat entertaining boss battles. For what it is, Resistance is not actually a bad game. It’s just stock-standard, and in a genre so competitive, that never bodes well.

Nintendo has really screwed up its 3DS hardware strategy this time