Scheduled for release this Autumn on XBLA and PSN, Alien Fear is shaping up nicely. The Unreal Engine 3 powered arcade shooter will put players in the role of a hardened commando and set them against “relentless alien hordes”.

The game promises to run hot and heavy with arcade-type action when it’s released; for now though, you’ll just have to pit your peepers against these relentlessly pretty screens. 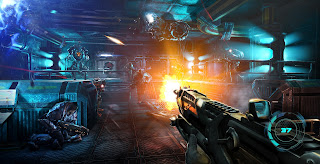 Nothing to see here folks, just the XBL update