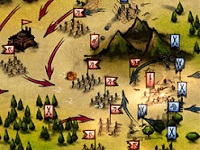 One of the genres I have always assumed that the iPad would excel at is the real time strategy. The large touch screen is a natural fit for the genre, and should make manipulating units and controlling the ebb and flow feel natural, much like pouring over a real battle map.

And yet the genre hasn’t really been done justice on the iPad to date. There are some excellent turn-based strategy games, to be sure, but nothing that I would argue is essential in terms of RTS. But now, there is. Autumn Dynasty is not only the best, most creative RTS on the iPad so far, it’s one of the finest (albeit basic) RTS games you could ever hope to play. While the game itself is a reasonably standard take on the genre, thanks to some superb presentation, tight level design and efficient use of the touch screen, this is a game that highlights all the strengths of the iPad as a gaming platform.

The most immediately obvious advantage of the game is the presentation – a lot of care has gone into building Autumn Dynasty so that it looks both classic and classy. The battle maps look like real battle maps, the units look like ink brush strokes drawn on to the page and then as soldiers die, the ink gradually fades. Cut scenes are drawn in the same way, so while there’s nothing flashy about Autumn Dynasty, it’s a genuinely elegant game that you’ll be playing. 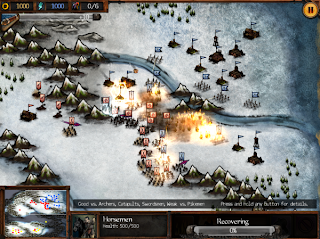 The gameplay itself is also quite elegant. As a stripped-down RTS it plays out very similarly to the now-classic Lord of the Rings: Battle for Middle Earth games. Each battle map features a certain number of nodes, on which buildings can be placed. This has the dual effect of forcing players to be strategic about what buildings they place down, as there’s not many nodes available, and forcing the action to concentrate in a few strategic places across the maps – where the nodes are.

The buildings that are placed on the nodes have all the usual RTS effects – producing units, defending the base – and additionally players need to build farms to produce the cash to buy these units. As with most light RTS games, resource generation is automated through the farms, so there’s no need to build Starcraft-style harvesters and the like. The focus is instead on manoeuvring units around to strike at enemy weakpoints, and furthermore, as most skirmishes only feature a handful of units a side, making efficient use of the unit’s special abilities.

Directing units around the battlefield is as simple as selecting them and drawing a line in the direction you want the unit to move. In the very rare instance there’s a moment of pathfinding weakness, but for the most part the units are responsive and controlling the battlefield is a stress-free experience. 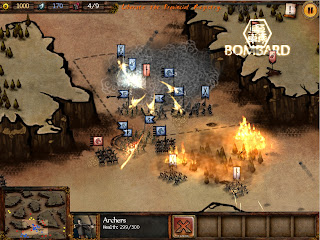 Each unit has a range of special abilities that can turn the tide of battle by making efficient use of the battlefield. Pikemen can dig in to a forested area, becoming effectively invisible and harrying any enemy units that pass nearby. Cavalry can start fires in those forest, causing massive damage to anyone trapped within. Soldiers can start avalanches on mountainous regions, to much the same effect. Though the game doesn’t concern itself with higher military tactics like supply lines and morale, effective use of the terrain is required for success in this game, and it’s enough to get people thinking strategically.

But what is most impressive about Autumn Dynasty is how full-featured it is. There’s a reasonable-length campaign mode, but critically this game doesn’t skimp on the multiplayer options – there’s both online and offline multiplayer.

The result is a game that is perfect to carry around on the iPad, as it offers enough for short bursts of play, while also being meaty enough for an extended gaming session. It’s great to see the iPad finally have an essential, traditional RTS.