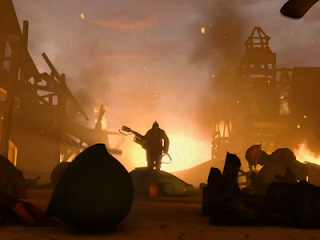 After years of waiting, it’s complete; every member of the team in Team Fortress 2 now has their own video. The Pyro tops it all off with what may be the darkest introduction yet.

The video truly shows the dark side of the Pryo. What the Pyro thinks and what the Pyro sees through the mask are some of the darkest images to come from Team Fortress 2. Valve has done a magnificent job at making us fear the (still) gender-less megalomaniac who loves playing with fire.

This video accommodates the Pyromania update, which is Valve’s latest update to their award-winning, recently free-to-play multiplayer team-based first-person shooter Team Fortress 2. Among the usual new hats and new weapons, the update will include 11 new achievements and a brand new game mode titled “Doomsday”. This new mode will pit the red and blue teams against each other in an attempt to fuel their rocket before the other team can fuel theirs. Details beyond that are scarce, but it appears that the new achievements will exclusively be linked to the new mode.