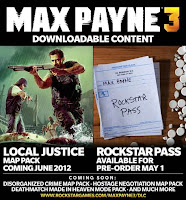 Rockstar’s highly anticipated sequel to Max Payne has been getting some seriously good word of mouth about it’s multiplayer mode, so it’s no surprise then that it’ll be getting some dlc.

While news of impending dlc is nice and all (and not totally unexpected), I can’t help but be a lil’ miffed that there’s no single player stuff in the works. One of the biggest strengths of the franchise has always been it’s tightly woven narrative and more of that would be a very welcome thing for fans of the game.

So what are we getting? Map packs and the ever popular ‘season pass’.

The Rockstar Pass grants you access to all upcoming Max Payne 3 DLC and will be available for 2400 Microsoft Points (Xbox LIVE), or $29.99 (PlayStation Network and PC) – over a 35% discount compared to purchasing the content individually. Once purchased, the Rockstar Pass enables gamers to download all DLC releasing through the end of 2012 via the in-game store as soon as it is made available on Xbox LIVE, PlayStation Network, or PC.
The Local Justice Map Pack, coming in June, will include the Police Precinct map for Gang Wars, Deathmatch, Team Deathmatch and Payne Killer multiplayer modes. The pack will also feature two additional maps for Deathmatch, Team Deathmatch and Payne Killer, new precinct-themed multiplayer avatar items, multiplayer challenges, and more.