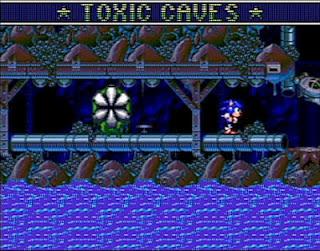 Remember those days when Sonic was everywhere? Not just in the usual advertisements or in your Happy Meal, but featured in as many games as Sega could put him in. Kart racing, slow labyrinths, and (drum roll) pinball.
Pinball was actually nothing new to Sonic at Spinball’s time of release, having been featured as a mid-level gimmick in at least three prior games. What makes the combination feel original here is the execution, namely new mechanics and reduced emphasis on platforming.
Sonic is moved around a pinball “table” by hitting him with the flippers, but you need to actually explore the stage in order to win. Exploration can be done by breaking roadblocks, hitting switches, going up tubes, fighting enemies, and more. Each map is expansive enough to warrant many screens, so there are different sets of flippers placed throughout the stage to accommodate your ever changing location. Should you slip between a pair of flippers (which is decidedly easy, considering the large gap between them), you may or may not have an opportunity to recover by jumping up. Otherwise, you’ll lose one of your precious lives (and believe me, they are precious). Your goal is to gather all of the Chaos Emeralds in the level then head to a showdown with a Dr. Robotnik boss. 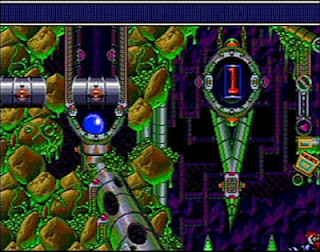 While you’re bouncing around these labyrinth-like stages, messages also appear at the top of the screen to offer advice and inform you of score bonuses stages. These communications are a mixed bag, really. Some offer genuinely helpful insight and give you an idea of what you’re supposed to be doing, whereas others only add to your potential confusion.
Truth be told, you could probably beat the game in twenty minutes if you knew where to find all the emeralds and how to properly manoeuvre the blue blur. There are only four levels, with a brief bonus stage popping up after each. What makes the game take hours to beat is the need to memorize map designs and trap locations to make any real sort of progress.
To make matters worse, should you die three times, the game is over entirely. Yes, that means no opportunities to earn a continue option like in the main series Genesis games. Coming up with a high enough score to earn extra balls can be quite a daunting task as the game is very stingy when it comes to rewards. You’ll spend most of your time replaying that dreaded first level as you attempt to memorize the second and so on.
Is the game fun enough to warrant that? If you come into the game expecting the standard pinball affair, you’ll no doubt be disappointed. Spinball fails to emulate the experience or physics present in the real game of pinball, granting you much more control and influence over Sonic’s direction than in a “true” simulation. Still, when the game works, it’s actually reasonably gratifying action. The problem is that these moments are too far between. 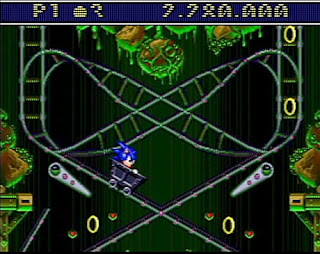 The environments aren’t quite as striking as Sonic’s other outings, but there is a bit of charm there if you keep an eye out. Sonic himself seems washed out and his sprite looks wrong somehow. The biggest complaint in all of this is the frame rate, which can fluctuate too much for comfort and really should have been fixed before release.
The soundtrack isn’t totally up to snuff either, but that opening jingle when you turn on the game is ridiculously catchy. It almost makes those 800 Wii points seem worth it…briefly.
Sonic Spinball isn’t downright dreadful, but it’s clear that the game was rushed to the market to capitalize on the speedster’s budding reputation. The concept was fine, but had more time been devoted to polishing the experience, this could have been a sleeper hit. It’s alright to make a challenging game, but if it’s rarely engaging or rewarding, why bother?
-Clark A

Is 2012 already the best year ever for games?