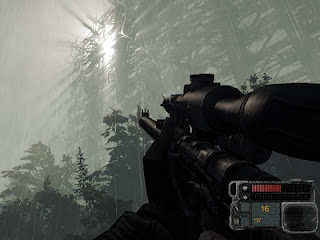 For fans of the S.T.A.L.K.E.R. video game series created by GSC Gameworld, it’s been a sad past month. With the still somewhat-recent announcement that S.T.A.L.K.E.R. 2 is officially canned (along with GSC Gameworld) and that the remaining members have created their own studio (Vostok Games) and are now making a free-to-play MMO first-person shooter, many feel that the good days of looking forward to being a vulnerable badass in a post-apocalyptic world set out to kill the player are over. However, there appears to be rays of hope through the irradiated clouds.

Inspired by GSC Gameworld’s recently deceased originator, CryZone: Sector 23 has thrown off its mod hat and will now be released as a fully independent game. Now, whether that means it will be a retail game or if it will be a free download is unknown, but considering the legal entanglements that the team would get themselves into if it were a retail game, logic suggests that the game will be a free download.
As for the game itself, it appears an extremely ambitious project to redesign S.T.A.L.K.E.R. gameplay elements and scenery recreations within CryEngine 2. Also, the Russian modding team behind the game is adding a bit more of everything; more unpredictable AI, more weapons, new anomalies, new artifacts, new mutants, and larger locations. The modding team also have/are planning to add Far-Cry-2-like first aid kits, near-100 per cent destructible environments, better melee combat, a better trading system, and a fast-travel system of sorts. The game even comes with it’s own story; it revolves around a father who’s son has just died from leukemia and said father fighting his way through the newly-created area of Sector 23 in order to find a way to the ever-elusive Wish Granter.
If they don’t add any new bugs in the process, I’ll be 100 per cent on-board with this fan-game of sorts.
Share this