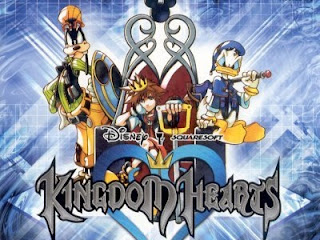 Right off of the bat, Kingdom Hearts was a bit of a confusing concept; a Japanese Action-RPG where Disney heroes, along with a few noticeable Final Fantasy characters, team up with a group of anime-soaked teenagers to fight an army of “Heartless” minions that are being pulled at the strings by classic Disney villains and several unseen entities? It sounded like a bizarre, half-awake dream that someone had while attempting to marathon Disney movies and play Chrono Trigger at the same time in the dead of night. But it got even MORE confusing as more games bearing the name were released; alternate worlds, an enormous back-story, and more powerful unseen entities were some of the biggest additions that made the series even harder to follow. Including the fact that some major games in the series have been released on various Sony and Nintendo platforms, it seems hopeless that a single individual would ever be able to experience or even understand Kingdom Hearts in its entirety. However, with a recent rumour making the rounds, that unachievable goal might become a reality.

According to a source that Dual Pixels calls “Geno” (Super Mario RPG reference FTW), an HD compilation of every single Kingdom Hearts game, excluding the two low-key mobile titles, is to be announced at E3 and given the name of “Kingdom Hearts: Remembrance”. According to this “Geno” character, who apparently also got ahead of the Castlevania: Lords Of Shadow 2 announcement, the compilation is to not only pack Kingdom Hearts 1 and 2, Chain Of Memories, 358/2 Days, and Birth By Sleep into one convenient package, each game will also come with additional side-quests that better tie the individual games into the Kingdom Hearts universe. Mr. Geno also states this compilation will be available on the Wii U, the Playstation 3, and the Playstation Vita. If this announcement is to be made anywhere, it is most likely at either Sony or Nintendo’s E3 press conferences, which are on Monday the 4th at 6:00PM PST and Tuesday the 5th at 9:00AM PST respectively.

Now, as for my take on this rumour? Other than the pain involved in trying to update 358/2 Days’ Nintendo DS graphics to something that would look acceptable on the PS3, this idea does not sound too ridiculous. The whole “Extra Side-Quests” bit actually sounds convincing, as Kingdom Hearts director Tetsuya Nomura vaguely hinted at the fact that he may have made Kingdom Hearts’ story too complicated because of outside pressure from an associate of his, Hironobu Sakaguchi. Admittedly, if I was being cautioned by the father of Final Fantasy while I was directing an RPG, I would take his words into heavy consideration.

Digitally Downloaded will keep tabs on this rumour and see if anything evolves from it.