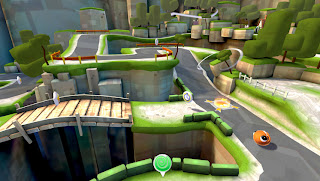 Sony may not have a definitive mascot outside of Japan, but the company houses some unforgettable characters. Already quite popular is Sackboy, the hero of a game that spawned more creative ideas than many games this generation. On paper, Little Deviants looks to channel a similar novelty by virtue of using nearly every single feature in the Vita’s arsenal. Could the alien critters in Little Deviants soon join the ranks of Sony’s other heroes? If the quality of the actual game is any indicator, they’re best left forgotten.
Ignoring that the game is intended to showcase the Vita’s hardware, this is a rather run of the mill minigame collection starring particularly cutesy aliens referred to as deviants. Your overall goal is to restore the parts of a broken spaceship to send the deviants home after a crash landing. This is done by achieving high scores in the games you play, thus unlocking more games and widening the scope of potential ship parts to obtain. There’s very little in the way of narrative, but the gibberish-spouting characters do a decent job of explaining things through slapstick comedy.
In theory, these games are so simple they should work. Some games will have you skydiving using the tilt sensor, rolling around in ball form by using the rear touchpad, or knocking robots out of windows by tapping the screen with dextrous reflexes. They’re not really worth discussing in detail, since they have the approximate depth of a Mario Party minigame, but within three plays, you should have a respectable mastery. 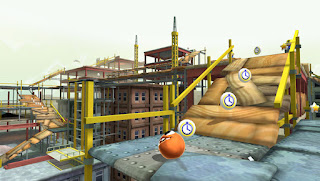 Unfortunately, even with a pool of 30 games, many of them serve merely as alternate modes or extra levels of ones you’ve already played in disguise. Even if many of them weren’t redundant, there still wouldn’t be much to see here, especially since your skills often carry over from one game to the next.

Since the purpose of the game is to show off the Vita, does the game do an effective job of showing practical uses for them? Frankly, it often ends up doing the opposite. The camera, microphone, tilt sensor, rear touchpad et al manage to make the experience more troublesome than it should be.
I found myself frequently wrestling with the controls, most notably when the rear touchpad or tilt sensor came into play. One game requires you to move your little deviant around by pressing the rear touchpad to manipulate the ground ala Super Monkey Ball, but the accuracy offered leaves much to be desired. In a similar vein, several minigames require tight turns at high speeds with little to no time to react. It doesn’t help that you have to tilt the system using dubious accuracy to pull of these turns. It’s not even so much that the games are difficult – I was able to obtain more than a few gold medals – but merely frustrating.
Earlier I cited Mario Party as an example of how much depth you can expect from each game. The main difference between the aforementioned title is not only the higher quality of the games on offer there, but the amount of content as well. Little Deviants has a grand total of about 30 games, which may seem like a lot initially, but it’s difficult to justify repeat plays once you’ve attained a gold spaceship in each. Considering the moderate level of difficulty in most, that shouldn’t take too long. Beyond replaying the games (of which many are questionable), there’s not much longevity to speak of. 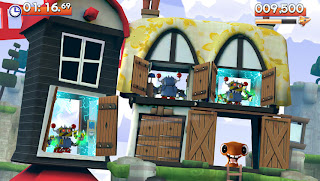 Aesthetically and musically, the game is quite competent. The characters, though simple, have a reasonable amount of charm with their basic designs. The music is nothing to write home about, but feels at home within the realm of the world itself. You’re not going to be blown away, but that was never the goal here.
Little Deviants stands out among the Vita launch titles in that it actually feels one. Whereas several of the other games succeed at doing what they should for their respective franchises, Deviants has the hefty task of trying to usher in practical uses for all the features whilst establishing a new property. Most of the games here are at least playable, but it’s still a rather barebones and forgettable collection that won’t last much longer than a week. Either way, the deviants are off to an unfortunate start.
-Clark A