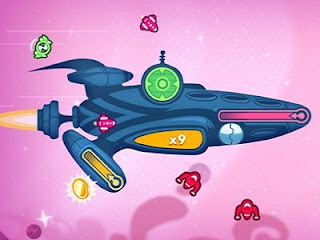 Flight Control is back, with what could probably be called the first genuine sequel for Firemint’s iOS rock star. Flight Control Rockets tries to do a couple of new things, and while there’s something about it that leaves a bitter taste in the mouth, it’s still an enormously addictive little game.

That bitter taste is almost certainly the involvement of Firemint’s new boss, EA. To be blunt: there is microtransactions in this game, and I don’t like that. See, a lot of Flight Control Rockets is locked away at the start, and only by earning virtual coins can 80 per cent of the game become accessible. That wouldn’t be so much a problem if there wasn’t some serious grinding required to get enough virtual cash to buy this stuff; it can be very, very virtually expensive.

The reason why becomes obvious when players tap on an innocuously little “shop” icon on the front screen. Why, you can exchange real money for plenty of the virtual cash! That saves grinding, let’s do it!

And by contrast, don’t forget that the previous Flight Control titles we always 100 per cent unlocked from the start. As I said at the beginning of this review; a bitter taste indeed. 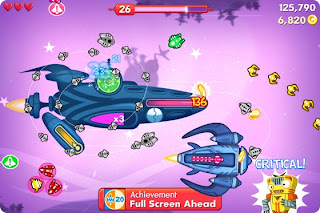 Most of the locked away content is good fun, mind you. The main addition to the basic Flight Control gameplay is the robots. Each robot has a different in-game effect. Some generate extra virtual money, others boost score, and others allow extra planes (rockets) to crash before it’s game over (instead of being game over when a single crash occurs, as in the old Flight Control, Rockets gives players three “lives” by default. The robot that boosts those lives is invaluable). Each of these robots can level up with use and become more effective at doing what it does, but this comes with a downside; robots run on batteries and use one too often and – you guessed it – you’ll need to shell out virtual cash for new batteries.

The game itself has a few little tweaks too. It plays exactly the same – direct a coloured spaceship to a runway by touching it then drawing a line to the right runway – and indeed the default level of the game is exactly the same as the original Flight Control level, just with a different coat of paint. What is different is the variety of the spaceships. There’s the standard rockets, but there’s also ships that split in two, ships that leave behind miniships (that also need to be landed), and strings of ships that follow the leader like a conga( line. The action in Flight Control Rockets ratchets up quickly and generally speaking this is a far faster game than Firemint’s previous effort.

All in all, Flight Control Rockets is more of a game. There’s robots to collect, stuff to unlock, and a far greater emphasis on getting high scores with the introduction of score multipliers for landing ships of the same colour one after the other.

The thing is I’m not sure Flight Control fans wanted a game that is more of a game. Flight Control did so well because it was easy to pick up and play, and easy to put down. It was a commitment-free experience that never left people thinking they needed to work to finish it. And yet Flight Control Rockets demands players do just that.

Time will tell if this was the right direction to take, but I just can’t see this hitting the same level of mass popularity as the original Flight Control.