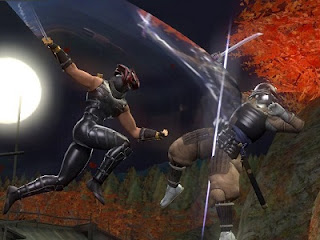 Ninja Gaiden Sigma Plus isn’t really a new game. It’s a very old game that has been updated slightly to hit the PlayStation Vita launch window. That’s not actually a bad thing, though, because this is a classic game for a reason.

Released back in 2004 on the Xbox, Ninja Gaiden has also popped up on the PlayStation 3. It’s immediately noticeable that this is, essentially, a “Ninja Gaiden HD.” Many of the same problems that have faced the other HD ports such as Beyond Good & Evil, Tom Clancy’s Splinter Cell, and Metal Gear Solid also apply here. Environments are largely empty experiences and are little more than generic corridors leading to generic rooms. Character models look nicely detailed, but they’ve got a strange plasticness to them.

And in terms of plotting, too, Ninja Gaiden is a relic. Cut scenes are oh-so-brief, and utterly devoid of interesting personalities. While this isn’t the kind of game that necessarily needs a good story to get by, it’s nevertheless a decidedly retro experience playing this game, and whether that is good or not from your perspective is going to have a significant impact on how much you can get into this game. 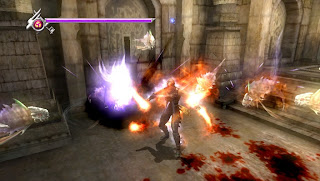 The gameplay itself has held up remarkably well through the years. Scratch that – it’s still brilliant. This is a rock hard action game that requires both reflexes and brain matter. It’s a game of timing, precision and patience, and then a visceral, bloody ending. It’s satisfying watching that sword slice through the armour of an opponent that has been stubbornly blocking everything for what feels like minutes. It’s grim with all the blood and carnage, but that’s a revenge story for you.

Combat is very much the focus of this game, with the in-between platforming sequences being little more than funnels to the next melee. There’s also very little room to explore, and indeed it’s not unfair to say that the typical Call of Duty game is a more open game than this. Not that it’s necessarily a problem; think of this as more of a single-player fighting game than a grand adventure, and it’s a rollarcoaster of excitement from start to finish. In true Tecmo Koei style, there’s an eye for theatrics, and the game doesn’t waste a single opportunity to show off how cool ninjas can be. 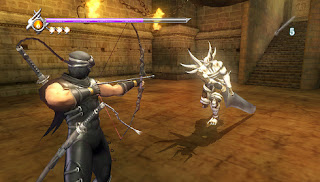 Ryu is still an agile hero despite his years. He backflips out of danger at the tap of the control stick. He can leap from walls and cast a range of nasty, room clearing spells. And then, when the time is right, he can line up a killer blow with that nasty sharp sword of his. The reason this series has remained so popular over the years and indeed the reason they keep remaking this game is because Tecmo has done a remarkable job of balancing the style and panache of the ninja myth with the need to offer brutal combat. It’s one of the reasons this game stands head and shoulders over ninja rival Shinobido; Ninja Gaiden is the more straightforward but engaging game thanks to that brutality.

It’s a game that can be brutal on players, too. This is a game that will renowned for being hard and unforgiving, and it remains true. Enemies capitalise on the slightest drop in the defences, and swarms come from every angle. Rarely the camera proves to be a threat in itself, being a touch slow to respond when you want to focus on something behind Ryu. 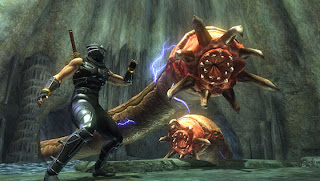 Even the easiest mode on offer, Hero Mode, is anything but easy. All that mode does is kick in an autoblock when Ryu’s health is critical. Small help when the enemy has you cornered.

There’s a couple of moments in the game that I expect Tecmo has removed for the upcoming Ninja Gaiden 3. The horse-riding enemies are genuinely irritating, and some of the projectile weapons are unwieldy. That’s not a surprise since Tecmo wants its combat personal.

Chances are you’ve played this game before. You should have. It’s a great game. The real selling point here is the fact it’s portable. That may or may not be enough for you. It was for me, and I personally consider this to be the definitive version of the game.

Others might object to paying full price for an old game that has very little new stuff added to it, though.