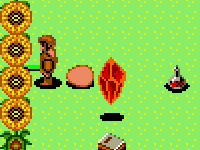 I never owned a Game Gear. History will tell me that I made the right choice in sticking with the Game Boy rather than going with Sega’s handheld, but it did mean I missed out on some good games. One of those games, as I’ve just discovered, is Dragon Crystal.

Dragon Crystal is a Roguelike RPG. For the uninitiated that means it’s a grindfest RPG with randomly-generated levels, lots of look to find, and a high difficulty level. Players wander around each level of a 30-flood dungeon looking for the exit to the next level, while collecting weapons, armour, magic items and food on the dungeon floor as they go, and killing monsters and levelling up at the same time.

This is all done in a turn based fashion – the player takes a turn then the monsters take a turn, and it can be quite strategic. Often the enemies would overpower the players in an out-and-out sword fight, so players need to intelligently use magic and other resources to make their way through the dungeon. The catch is that magic books, rings and other items don’t reveal their nature until the player uses them for the first time. You have no idea if the ring you’re about to put on is cursed, or the magic book you’re about to read is going to help the enemy rather than yourself. Managing that risk is critical to get through the dungeon. 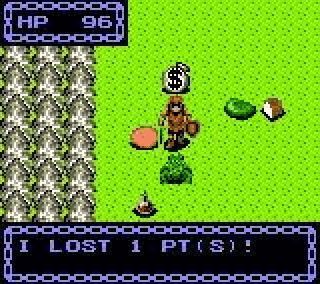 Players are forced to hurry through the levels too, as food is a limited resource. Walking around consumes food resources, and running out puts the hero in a dire situation. The only way to keep the hunger in check is to run through a level, pick up all the food, then move to the next level.

All up this would be a fairly short game – a hour or two at most to get all the way through the 30 levels, were it not for the difficulty. Though Dragon Crystal is one of the easiest Roguelikes I’ve ever played, it’s still challenging, and deaths can still happen as a result of the game’s penchant to be random. The game is relatively forgiving on death though – pay a certain amount of money (which goes up every few dungeon levels) and you can revive yourself to keep going. Unfortunately, there’s no leaderboard or scoring system in this game, which is usually what takes a Roguelike and turns it into a really addictive experience.

Dragon Crystal is also quite poor in terms of presentation. The music is a short loop of just a few notes long and it’s both painful and catchy. So catchy that just writing about it has got the song stuck in my head and I’m about to start crying in agony. Such is the pain I go through for you dear readers.

The visuals are quite poor as well, with ugly, badly animated sprites, and a very small range of enemies with far too much palette swapping going on. Of course, Roguelikes don’t exactly need to be pretty. Case in point; Nethack. That said, when you play a Roguelike with nice production values, such as Chocobo’s Dungeon, it’s easy to see there’s missed opportunity here.

Dragon Crystal is cheap and simple entertainment. It’s not going to set the retro world on fire, but it’s something to kick back with on a lazy Sunday. Can’t really fault that.