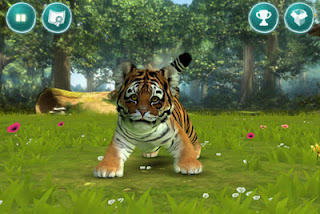 How’s this for an admission; Microsoft releasing games on the iPad. Never mind that there are Windows tablets on the way; the iPad has Kinectimals, which links in with your virtual pet on the Microsoft Kinect to boot.

The only problem is, while the game is charming enough, it fails to be the same compelling package as the Kinect original.

On the Xbox 360, what Kinectimals did really well was act as an interactive tutorial for the controller-free style of gaming for children. Given that children have become an important demographic for the Kinect, this was a welcome success indeed. It allowed children to interact with a cute big cat cub, play basic mini-games with it, and otherwise immerse themselves within a gorgeous art style, while at the same time gaining the skills needed to then go and play some of the other Kinect library.

This is all present in the iPad game, and works beautifully. You’ll start out by picking your cub, and then jumping into a beautiful forest environment. This is one of the best looking iPad games to date, with a gorgeous art palette and the tiger, cheetah or lion cub bounds around with slinky-smooth animation and cheerful personality. Just as Kinectimals won over a legion of fans with its charm, the iPad game is sure to do the same.

The difference is in the interaction. On the Kinect it was wondrous fun to make a hand gesture to tickle the cub, or throw it a virtual ball; and it was the first time that had ever been possible in mainstream gaming. Those actions are mapped to the touch screen nicely, with simple flick and tap gestures enough to get the cub to do everything. It’s just that it’s not as much fun to do them, and no one needs an interactive tutorial on how great touch screen gaming is any more. 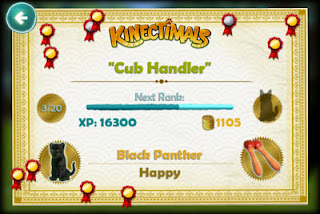 So Kinectimals needs to get by on its own merits, rather than its attachment to a gimmick. It only manages to do so barely. There’s just not much to do in this game; a handful of mini games, a limited range of interactions with the pet cub, and nothing to keep coming back to, this is a game whose charm shortly starts to thin, and the interactions are not half as compelling as mere touch gestures.

Microsoft has tried to spruce things up with a XP and levelling system that is reminiscent of the Facebook games that are so in vogue. Complete challenges and go up in levels, unlocking a few things and earning some money to buy them in the process. Like the rest of the game though, this system is far more limited than the other rival games.

So, while it’s not a particularly compelling game, it’s a fun and charming little toy box which will especially please iPad owners with young ones to quieten them a long car ride or similar. Check out some of the other cute and charming iPad games geared towards children first, though – this is a very expensive game for what you get.