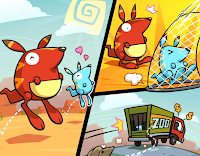 5th Cell, the company behind creative titles such as Scribblenauts and Drawn to Life, is back in action. Its upcoming title, Run Run Roo is slated for release on iOS in no more than a day from now, despite being just announced.

The game (naturally) stars a kangaroo named Roo on a quest across Australia, travelling all the way through Perth to Sydney to find her missing joey.

It looks to be a fairly dynamic platformer where stages take place on one screen with a variety of objects to interact with. The trailer promises over 400 levels, as well as achievement and leaderboard support. Most noteworthy though, is that the game will deliver 10 new levels on a weekly basis – without the need to constantly update the app.


Watch the trailer below to get a sense for the gameplay: