Over the next five weeks I will be reviewing the Geneforge series, recently re-released and let loose on the Steam store. This is something of a retro review, considering that the first installation was first published way back in 2001. For you retro/RPG junkies, that shouldn’t be an issue.

Just a quick note, readers: I’ve been struck down with a flu that’s increased the rate of mucus production a thousandfold and rendered the world in snatches aching of blurry pain for the best part of reviewing this title. If you could take that into account and send me some tissues I would be most grateful.

Geneforge is an RPG with some promise. The storyline takes place within a realm ruled entirely by “Shapers” those with the magic ability to create and bend life to their whims. You are an apprentice of the Shapers, on a journey to their training islands in order to become a fully fledged member of the order. On the way, your living ship is shot down by a mysterious vessel for unknown reasons and you wash up on an island. Like everyone who wakes up the beaches of monster-filled archipelagos, you decide the most prudent course of action is to haul-ass outta there before you’re eaten, solving some mysteries on the way.

Your class selection allows you to play as one of the three types of Shapers. There are of course Shapers proper, mages with conjuration and battle-magic abilities, Guardians, melee warriors with some aptitude for shaping, and Agents, a combination of melee and battle-magic. The character creation is a standard point-assigning affair. I played as a Shaper for this game.

The GUI for the game is decidedly isometric 2D in grainy 32-bit colour – with an extremely unintuitive interface and horribly clunky keys. The prime example of this keyboard-based screw up is evident in where I put my hands. You see, like the 90 per cent of us on this planet, I’m right handed, and that is where I wield my mouse. Being a very mouse centric game, my right hand is constantly on the mouse?

Knowing this, why did the developer put the camera pan on the arrow keys? It seems Spiderweb picked the hotkeys to be the first letter of whatever menu or command I needed so I could guess it without poking blindly around the keys, and I know that seemed good at first. S for shaping right? But really. Please just give me a WASD camera control. I’ll even look up the new, complicated hotkeys myself.

A lot of the crud is in the interface. Dialogue options are selected via tiny buttons, the inventory is awful and unresponsive, and brutal to navigate through. I can forgive a lot, but bad inventories in RPGs should be punished by the dev being thrown into the Rancor pit. The amount of time I spent organising a vertical scrolling item list I could have put to better use knitting tea cosies. 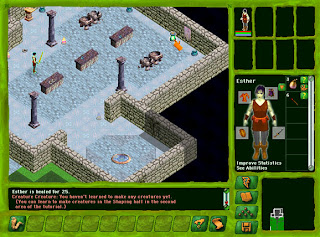 To be honest, there is not a whole lot of good here. No matter how many positives I tried to find, I just kept coming back to how mediocre it is. It’s a standard RPG. No toppings or flavour, just pure vanilla. The one thing RPGs should be judged by far and large is combat, and that is nothing interesting and generally bores. Sure, there are a couple of interesting, tense, moments here and there but not enough to impress me or keep me playing.

The only thing I can possibly say I like is the world of Geneforge. But there is an issue with that regarding that it’s not fleshed out enough. It’s a very interesting world and does actually have some twists on the aforementioned vanilla. I can only hope that this is expanded on further in the next four sequels. Despite the occasional writing foible, I actually wanted to know more. I went and talked to all the NPCs I could find, just to learn more about this wonderful world trapped in such a mediocre structure. It honestly got my imagination going with what little information they had given me about this place; I just want to know more and explore dammit!

This game was frustrating for a lot of reasons and I generally wouldn’t recommend it. However, if what happens here proves integral to the sequels, and THEY kick ass, only in that case do I suggest you play it. And considering that this game comes in a bundle with the sequels; you don’t have much choice but to buy it if by my later reviews make you think that you would enjoy them.

The promise held here is in the world, and if the sequels colour it to an enjoyable level, as well as make things less average in the combat and everything department, I think I have a bit of fun waiting for me in the Steam folder of mine.

With that, I bid you farewell until next week, but before you go, could you please pass the cough medicine?