The uDraw game tablet is a pretty impressive little gadget, and THQ has landed on a product that is proven at retail shelves.

As it is, though, it’s also a device whose potential currently outstrips the reality. There are some very big things that we would like to see added to, or altered regarding the software available on the tablet before it’s an absolute must have. Unfortunately, some of those updates or additions would never justify the expense of putting together additional retail software. Thankfully, by harnessing DLC or PSN/ XBLA for cheap software downloads, it’s still easy to hope we might see some good things happen there.

The first, and most important one, is that THQ implements a better way to export your completed art work. As nice as it is to have a website set up to show off your art works to the world, mandating that you go through the World of uDraw site is a very clunky way of doing things. A simple bit of free DLC to include an “export to email” option will fix this.

Another way THQ could go about that is build in upload support for some of the more established art sites. Partnerships with Deviantart or Flickr to bring some social networking to the experience would help. Art is, after all, a social experience first and foremost, and most people who would be interested in a drawing tablet would already have Deviantart accounts. 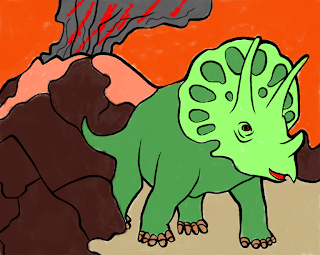 It would be good if THQ, or a content partner, could make more useful art lessons, too. Perhaps people could download “packs” of them, or THQ could publish a range of art lessons covering a variety of different art styles – portraits, cartoons, etc. Simply giving a casual artist or complete newcomer a full suite of art tools with bare bones tutorials doesn’t do a great job at encouraging them to practice. As a newbie myself, I know this from experience.

Another potential for the tool and software is in animation. On the Nintendo DSi, a little free downloadable called “Flipnote Studio,” despite being incredibly limited, was a monster hit for the DSi. The Flipnote community on Hatena (which hosts anyone’s Flipnotes) is still popular and well-supported, with people making short, basic animations.

There’s no reason that basic idea couldn’t be built out for uDraw, with (preferably) a YouTube export option.

The stylus-and-tablet setup also opens the door for a wide range of creative software to make the move to the PSN. Also on the DSi/ 3DS is a range of music-creation software called “Rytmik.” While you don’t make the music yourself, by arranging and creating samples within the application you can end up with some pretty interesting music tracks. This is something you wouldn’t want to use a regular controller for (it’s too clunky), and holding a Move controller to create full length tracks would be tiring in the extreme. uDraw tablet would be a natural solution to both issues.

There’s a lot of potential for uDraw to be more than a basic art program with some silly games attached to it (unfortunately what happened to the Wii game). The potential is there for a full suite of creativity that, because it’s fun to do on a console, would get people making stuff on their TVs.

We can only hope THQ realises this potential and makes use of PSN to enable it.