Sonic’s first true 3D adventure makes its way to Xbox 360 and PlayStation 3, but is it as impressive as it was in 1998? Short answer: no. It’s a reminder that Sonic Team tarnished what could have been a more than solid game by cutting corners and neglecting to fix ever apparent issues. Surprisingly, it can still be thoroughly engaging entertainment despite this.

Sega billed this as Sonic’s first epic game and as such, story cutscenes are routine here. Dr. Robotnik wants rule the world as always, but this time he’s using a mysterious being known as Chaos to do the job for him. This aquatic being constantly evolves as it consumes (you guessed it) chaos emeralds, so Sonic and Tails need to get them before Chaos wreaks total havoc on the world of innocent humans. The voice acting is rather goofy in that it doesn’t match with the mouths of the characters who speak the lines. It’s nothing but standard action movie fare here, but certain elements make it mildly intriguing.
When you’re not watching the story unfold, you’re playing as everyone’s favourite hedgehog. Sonic dashes through impressive 3D stages while collecting rings and defeating enemies in order to rescue trapped animals and collect chaos emeralds. The speedster can automatically attack enemies by double-tapping the attack button, thus making combat streamlined and precise. On occasion, Sonic will also face off against Dr. Robotnik and his minions in quick brawls. The stages are well-designed for the most part (more on this later), and Sonic’s 10 action stages are definitely worth revisiting. 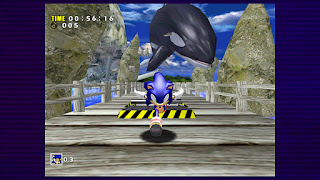 In between all this, Sonic must traverse an overworld. Very little can actually be done here, but nevertheless, plenty of civilians offer useless bits of dialog. It’s always straightforward to figure out where to go, plus there’s a hint system and a map if you happen to get stuck. It’s so easy to figure things out that you almost wonder why the hubs were included to begin with. Once you’ve completed all the stages, you can access them and replay them directly from the menu without need to travel the world again.
Even though the core of the game revolves around Sonic, there are six other characters to play as. Each of them brings tweaks to the gameplay that help deviate from the standard action stages. Unfortunately, not all of the characters are worth playing as. Big the cat’s fishing stages are almost offensively bad. Thankfully, their quests are significantly shorter than Sonic’s, so you can choose to treat their inclusion as mere bonus content (unless you want to collect all the emblems).
Perhaps the single greatest addition to Sonic Adventure is the Chao Garden, a seemingly magical place that offers nigh-infinite replay value. This garden allows you to raise highly customizable virtual life. Items can be purchased using rings gathered through the main game and animals found in levels can help your chao grow. The amount of depth put into this one extraneous mode is utterly astonishing, giving players true incentive to play through the stages again. One minor quibble is that chao can no longer be taken with you on the go ala the VMU like in the Dreamcast original (PSP support would have made this a must-buy), but it’s an understandable omission for a multi-platform game. The garden may seem out of place in a Sonic game at first, but this is arguably the best thing the 3D games ever brought to the series.
The biggest setback with the game is not the extraneous character roster or the sometimes funky dialog sequences. No, it’s the fundamentals that are warped to the point where mundane split-second tasks can become aggravating. Actions like talking to civilians can be troubling since you have to be in the precise spot, lest Sonic go spin-dashing 20 feet away. Picking up objects is no easier, which mars the otherwise brilliant Chao Garden. 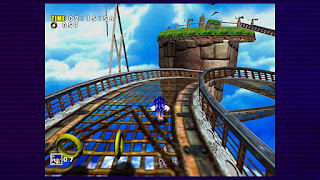 The absolute worst aspect, though, is the camera. Controlling Sonic is usually fine, but it can be hard when the camera is swinging around sporadically or getting snagged on scenery to cause unfair deaths. To ice the cake of disappointment, glitches regularly saturate the gameplay at unexpected turns. Had all the subtleties been fixed and the mechanics been fine-tuned back in the day, Sonic Adventure would be a truly outstanding piece of history. Instead, every single aspect of the game suffers because of the rushed game design.
The blurry textures of the Dreamcast will be immediately apparent to modern-day gamers, but they do get the job done sufficiently (aforementioned camera issues aside). Cutscenes are usually rendered in real time, which is a nice touch. The soundtrack is much more memorable, as it blends classic Sonic themes with new ones and the work of actual artists. There’s plenty of variety offered in the rap, rock, and other vocalized songs. Even if you don’t check out the game, the soundtrack might be worth tracking down on its own.
Sonic Adventure is an anomaly in that it has aged rather poorly but is still a tremendous value. If you can wrap your head around that, it means the people who do enjoy it will have a genuinely amusing experience that lasts over 50 hours. Hedgehog haters and 3D platforming newcomers need not apply.
– Clark A