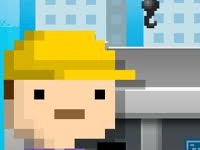 Tiny Tower is a management sim with a touch of the freemium business model going on. Your task is to build new floors on you tiny tower, populate it with residential or commercial entities and grow it until it’s tiny no more.

It’s a bit light on the strategy element, which I usually find most appealing about good management sim games, and every thing about it is geared for casual play. The comparison to Facebook games is obvious in that its mechanics are built upon you waiting X amount of time for things to be built and stores being re-stocked so you can make more money to build some more.

You can expedite the process by buying tower bucks, which are one of the currencies in the game, that allow you to rush certain things and get your tower growing at a faster rate. That’s the extent of the freemium aspect and unlike many Facebook games it’s not very invasive. You’re never asked to buy anything.

To be honest I find these types of games where you have to wait for prolonged periods of time for your game to progress, a bit tedious. But, some of them can be a nice little distraction for when you don’t really have the time to play “real” games and that’s the case with Tiny Tower. Several times day I feel the need to pick it up just to play for a few minutes and set it down again. I don’t necessarily like it but it’s it’s addictive and I sometimes wish I had never got it.

The games biggest fault is the simplicity and lack of variety. The mechanics are very simple and your quick to pick upon the best way to optimise everything so after a few days with it you could pretty much do it in your sleep. The lack of depth makes it a brainless activity that somehow gets it’s claws in you and wont let go. It’s actually a lot like doing drugs. You want to stop and you hate yourself for doing them but you just gotta do it one more time.

Regardless of the similarities with drugs I may or may not have tried, it’s still a decent little time waster for those moments where you feel extremely bored for a few minutes. Some times it all right to have some brainless activity to distract you from the realities of life. If you like managment sims and you like drugs… errr… games that distract you for short periods of time you could do worse than picking this one up for zero dollars.