Paradox Interactive’s Sengoku is an incredible game. It’s intelligent, creative and fulfilling. Though it’s never going to hit the mass market, it’s such a rewarding strategy game that genre fans owe it to themselves to add it to their collections.

I kicked off the review with the conclusion, because there’s very little about this game I haven’t already covered in our preview. The build we played back then was pretty complete, though there have been some superficial changes, what we said then stands. But in the interest of going through it again:

Sengoku is a very slow-paced simulation of the Sengoku period of Japanese history. For the uninitiated; that’s one of the more dramatic and interesting eras for the island nation, filled with dominant personalities, heroes and villains. And nearly endless military conflict, which is why it’s become a prime time period for action and strategy video games. It’s an era that’s been well-covered in the past in video games (most notably perhaps by Tecmo Koei with its Samurai Warriors series, as well as its light strategy series, Nobunaga’s Ambition), but rarely with the same eye for historical detail and depth as this game.

While nominally you’re in control of a single warlord with dreams of national conquest, you’ll need to micromanage that warlord’s support network right down to his advisor’s spouse, sons and daughters. They’re the ones that do most of the foot work, meaning it’s critical that they’re all kept content and loyal. At the same time, the warlord will need to set up (and plan to break) alliances with rival warlords. There’s plenty of tools to keep the intrigue interesting, including the application of ninjas and political marriages, so the diplomacy of this game should suit plenty of different play styles. And there’s a need to set up succession and heirs – people age and die in this game.

There’s some military flexing involved, but if anyone went into this expecting a Total War game, they’re in for a sharp disappointment. Beyond recruiting and directing armies, combat plays out on autopilot. Armies can take months of in-game time (which can equate to hours of real-life play time, as the lower game speeds are by necessity very slow) to arrive at their destinations, and should they run into an enemy army, the combat plays out automatically, and is represented on screen by no more than two samurai duking it out, and abstract numbers representing the strength of the armies ticking down underneath as losses happen. 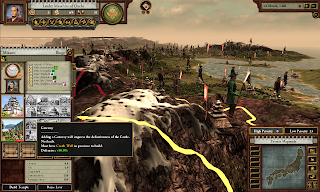 Successfully defeat the enemy and it’s time to put his castle under siege, a process that can also take months of in-game time to play out, if the castle is especially well built. So Sengoku is a game of understated thrills. There’s a thrill to successfully scrambling an army and lifting a siege on home turf, and there’s a thrill in seeing the colour-coded region that represents your hero gradually spread across the map like wet ink on paper, but it’s a decidedly different thrill to the more action-heavy strategy games currently in vogue in the mass market.

The main thrill, and the main place you’ll be spending time in this game, is in the development of your nation and the relationship building in the game. Fighting wars is costly, both in terms of raw finance and an “honour” system that acts as an intangible currency. Run honour down too low, and there’s going to be rebellions and dissent. There’s ways to increase honour, from giving vassals land, to sending money and gifts to the emperor, but those have costs of their own. There’s also the ability to set your advisers to build up the towns and fortresses in each territory you possess, so there’s plenty to do domestically, and succeeding at this game requires the ability to juggle several different balls simultaneously.

As a natural consequence, there is a lot of data to handle and digest in the game, and to Paradox’s credit, the jigsaw puzzle all seems to click together with precision and accuracy. At no stage in the 30 hours or so I’ve played this game in the last few days have did I see the AI do something to remind me that it was “just” AI. It’s not genius on par with Nobunaga Oda, but it works cleanly and manages to challenge players while not following any kind of alien logic. 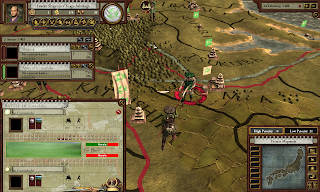 As a side note: this is one of those great strategy games where you can start playing at night, and then look over to the window to find daylight streaming in. Thank the maker for good coffee.

Japan provides a fascinating tapestry for wargames. As a small, thin island nation, but one with a hugely uneven geography, it opens up room for plenty of strategic depth, while at the same time changing up some basic strategies that you might use elsewhere – wide sweeping flanking maneuvers is more difficult to achieve and the smaller populations (at the time) and armies tended to favour individual brilliance and prowess over numbers. Sengoku does a good job at reasonably approximating the unique quirks of medieval Japanese warfare and diplomacy and wraps it up in a package both pleasing on the eye (if a touch limited in variety) and ears, thanks to a great soundtrack.

Really the only criticism is the interface of the game, which is occasionally a touch clunky and obscure. For instance, to open the diplomacy menu of an opponent, you need to right-click on their portrait, rather than click on the “diplomacy” menu icon, and aside from wordy tutorials, there’s no real explanation of that. That’s unnecessarily confusing initially, but it’s a small slight on an otherwise brilliant package. Japan might be a nation limited in geographic scope for video game purposes, but Paradox Interactive have produced a game that provide such rich strategic scope that it will very likely be the only game armchair strategists need for the remainder of the year.

If for no other reason than it’s literally going to take months to play a full game.

THQ CEO believes in the future of cloud gaming