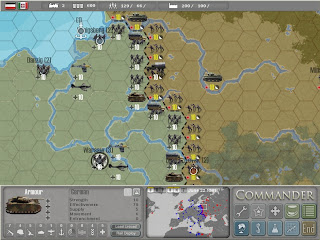 I finally got around to purchasing Military History Commander: Europe at War

for the Nintendo DS recently. It’s a game that’s been available for over two years, but each time I’d come across it, a quick look at the back of the box suggested a version of Advance Wars, but with hexes. As such I’d passed it on, but at $10 I was finally willing to give it a chance.

I was wrong, of course – I should have had more faith that a game Slitherine published would be a more in-depth strategy game than that, but with the utter dearth of grand strategy games on consoles, it’s honestly amazing that this game happened at all. Even then Europe at War is about as accessible to the “casual” strategist that grand strategy games come, but after seeing how well it works on the DS, I got to wondering why there are so few grand strategy developers and publishers that work with consoles.

For the uninitiated, grand strategy is a niche style of strategy game that is largely drawn, in theory and execution, from board games such as the classic, War and Peace

. They typically land the player in a historical situation (World War II being the most popular), and require you to command armies, research technologies, deal with diplomacy and so on. Popular games like Civilization boil this genre down to its core elements, and present an easy-to-play package, but grand strategy games are usually more complex, with manuals of over 100 pages of content and rules, and more focused (one period of history and historically accurate scenarios, rather than thousands of years in a fictitious world).

They can be real time or turn based, but either way, the consoles would be easily able to handle these games, as the number of inputs is usually minimal. Star Trek: Conquest

is far too simple to be “grand” strategy, but with PlayStation Move or the PS3 dual shock controller it’s perfectly workable, and the pace of a grand strategy game doesn’t get much quicker than that.

And as I’ve previously mentioned, even the DS is capable of handling a grand strategy game, so it’s not technical challenges holding developers away from consoles.

The next issue, then, is the production cost. Grand strategy games, as niche genres, generally don’t sell in the kind of bulk that would justify retail. Fortunately, modern consoles have download services and shopfronts, and through those, developers and publishers can take greater risks. All kinds of experimental and niche games find their way onto XBLA, PSN and even WiiWare.

And grand strategy board game developers, such as GMT Games, are actively recruiting support for iPad development. The App Store does share a similar style of environment to the console’s online shops. So what is holding back these publishers and developers from these services, if there’s no technical inhibitions now?

One argument is that the potential audience would be too low for these games on consoles to be worth the effort. I dispute that. Especially by sticking to the download platforms, there’s a serious market growth opportunity for grand strategy specialists like Matrix Games or Paradox Interactive with these consoles. Many console gamers have never experienced games of this style. Many consider the likes of Advance Wars to be “strategic.”

While the incumbent audience of PC gamers need to continue to be catered to, publishers should be looking for new opportunities to find new consoles. Something relatively light, like Panzer Corps, would work really well as a PSN or XBL release. Combat Command could find itself a niche on WiiWare or the 3DS eShop, especially considering how barren both are for new releases these days.

Hearts of Iron should be on every game playing device possible.

The days where the PC was the easiest and least expensive way to product and then sell a game are diminishing. Thanks to the online shop portals of consoles, and the App store, it would be a great thing for a whole new audience to be introduced to such a wonderfully fulfilling and challenging genre as grand strategy.

Would you download grand strategy games, and play them through PSN, XBLA or the Nintendo download services?

The Amazon affiliate links in the piece above provide Digitally Downloaded with revenue. We thank you for your support!
Share this