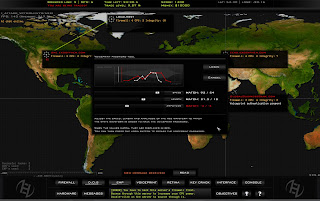 Romanticised by Hollywood through classic films, the modern day hacker has been immortalised as the digital age’s rebel with a cause. These contemporary pirates represent the (rose-tinted) ideal of intelligent footsoldiers in the ever-present fight for independence. It is presumably that type of Robin Hood-style hero that Hackers Evolution Duality is attempting to evoke, rather then those behind the appalling PSN hacks this year.

Like any good simulators of niche passtimes, Hackers Evolution Duality (HED) attempts to give a virtual, risk free experience into the inner workings of a realm that otherwise would be inaccessible. In an attempt to stay true, the gameplay of HED follows the logic and basic principles involved in hacking.

The games idea is simple enough, and intelligently portrayed through an excellent tutorial. There is a malevolent AI threatening world domination and you find yourself as the uber hacker who’s silky skills are required to save the day.

Thus, the player attempts to gain access to their opponent’s digital information. To achieve this, the player needs to infiltrate the opponents systems, by swatting away firewalls and other data-protection services (e.g voiceprint and retinal scans), diminishing defences (through denial of service (DOS) and electro-magnetic pulse (EMP) attacks) as well as generally using every trick at their disposal in a bid to navigate increasingly sophisticated systems. As there is no feeling of achievement without the risk, your hacking is performed under intense time pressure due to the threat of being discovered, tracked, and presumably jailed. Difficulty is added in that your attacks need time to power up so must be used wisely, as multiple attacks on each system will be required whilst your own ability to access others systems may be impeded by attacks against your own computer systems.

In a drastic alternation from the ‘typical’ hacker simulation, the ‘minigames’ that make up challenge factor of the game (as well as earning the title, and soul, of hacker simulation), such as DOS and Firewall breaking has been drastically simplified to appeal to a larger audience. Indeed, unlike predecessors or competitors where clues are carefully hidden amongst text and log files, the players have to deal with its watered-down replacement: simple, one dimensional click mechanics (aligning a bar to match with a number. Don’t feel too concerned, you get to do it a whole four times). The firewall cracking involves no actual effort (you click the grey firewall button) and aligning an EMP is as simple as correctly timing the satellite’s rotations to affect the right latitude. Indeed the hardest of these challenges barely involve utilisation of things resembling higher cerebral functioning.

An example of this patronisation is the staggering mis-utilisation of electro-magnetic pulses. The idea of your rather limited virtual arsenal including an EMP carefully controlled from a satellite is, frankly, laughable. If you used beer goggles, James Bond thinking and a bit of a squint you could argue for its existence in this game. After all, EMP’s are theoretically designed to create rapidly changing electric/magnetic fields that can result in damaging current as well as voltage surges, which thus could serve as a use for removing an opponent’s electronic systems. What makes the design so unfathomable and blatantly wrong is that HED’s EMP does not surge the opponent’s computer, but merely reduce its integrity by 1 (an arbitrary number); Far from the indiscriminate death from above that satellite induced EMP should actually create. Sadly, the lack of functional difference between your methods of attack does not alter the perception of repetitiveness. 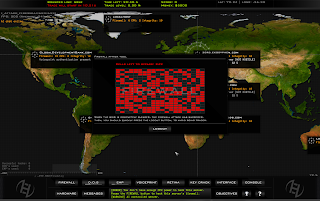 Now, whilst there is a lot to say about the gameplay and its lack of sophistication combined with conceptual misdirections there does appear to be a logic behind it. The logic: simplification won’t matter as time pressure creates challenge regardless. And so it does. Featuring heavily in the interface is a clock that counts down in milliseconds. This will always create a sense of urgency, a feeling that is compounded through the intelligent utilisation of music. Added in, random virtual hackers can become hostile and delay the players attempts at success, which means the game can reach a somewhat admirable, if frustrating, challenge. Despite this, the lack of variability does mean this quickly becomes tedious.

Outside of gameplay, a great deal of work has gone into the game. The interface is smooth and sleek, the graphics are remarkably stylish, the maps intelligently rendered. The world that the player is sent into does feel an excellent playground into which fun adventures could so easily have been had. Special note must be given in that the computer systems and interfaces which are very aesthetically pleasing. Music is appropriate, electronic and highly enjoyable with an excellent level of variability in its soundtrack. Sound effects are well performed and set the mood nicely.

Sadly, despite this, the experience of HED is one which has slightly missed the mark. With slightly more challenging mini-games (both more appropriate options and increase in difficulties), HED could prove to be a far more engaging, less repetitive experience.