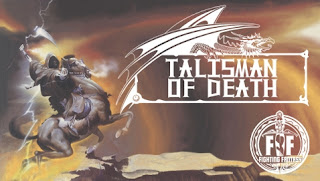 Gamebooks are making a bit of a comeback right now. Thanks in large part to the iPad, but also the various e-Readers out there, there’s been a number of developers that have seen opportunity in revisiting this non-linear style of story telling.

Fighting Fantasy is possibly the most highly regarded gamebook franchise out there (and is indeed now back in print for people to rediscover), but to date other digital gamebooks, such as Tin Man Games’ Gamebook Adventures series, has provided higher quality experiences.

Laughing Jackal has done a good job in rebuking that trend with its PSP Minis treatment of Fighting Fantasy: Talisman of Death. Despite the poor platform the UK developer has to work with for gamebooks in the PSP and PS3, they’ve done a great job in making it work and furthermore, have actually managed to turn the source material into a more interesting game than the original books ever offered. 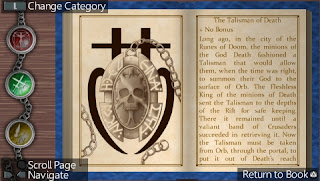 To start with though; the PSP is not a good e-Reader. It’s not even a reasonable e-Reader. Real estate is limited, and the resolution, while workable, is not a patch on either the iPad or proper e-Readers. You can’t even turn the console on its side comfortably to emulate a book, like you can with Nintendo’s DS and 3DS titles.

Laughing Jackal’s solution is surprisingly elegant; display the character statistics and inventory on one “page” of a virtual, opened book. Display the text on the other. If need be, that text page can be zoomed into to increase the size of the characters, and players can use the PSP’s circle pad to scroll (at a comfortable speed) up and down to read the entire ‘page.’

Other, less important details, such as character and monster artwork and backgrounds, and a list of the pages in the book that you’ve visited so far, are squirreled away to a secondary menu. Since these fill the role of bonuses or unlockables, it’s not necessary to have them prominent, so it is a sensible decision by Laughing Jackal. 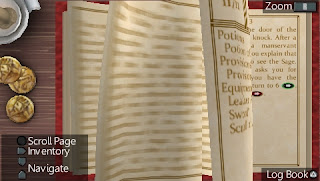 Although the text resolution isn’t perfect, and you won’t be able to sit and read this for hours on end without ending up with tired eyes, it’s as good as it can be, and the presentation aside from that is first class. The music background especially, is generic fantasy, but also ambient enough to provide a comfortable scene for the action.

Generic fantasy music is appropriate as well, because the story itself is entirely generic. Fighting Fantasy gamebooks aren’t remembered for being literature classics; they’re pulp fiction, Conan the Barbarian style fantasy experiences, but that kind of B-grade experience is exactly what you’d want from this kind of game anyway. No one goes to a Michael Bay film to see an Academy Award-winning turn by Shia Le Bouf, and no one reads a Fighting Fantasy gamebook because the author is a Pulitzer laureate.

As usual with gamebooks, The Talisman of Death can be brutally-hard. A single wrong decision can lead to the Game Over screen. Combat is rarely stacked against you in an single melee, but attrition wounds build up quickly. On the downside with this Minis version, there’s no way to “cheat” and go back to earlier passages if things turn sour. To compensate, Laughing Jackal has instead made the combat a skill game, rather than a dice rolling exercise in luck. 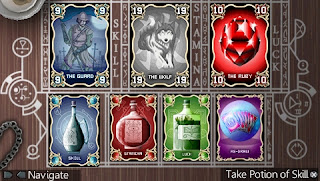 Here, combat plays out over a grid, in a memory-style mini game. There are two icons – one will damage the enemy, the other will damage the hero. These are jumbled over the grid, displayed briefly, and then disappeared, and then it’s time to choose one. If the hero has a higher skill rating than his opponent, then there are more friendly icons. If the opponent is the more skilled, then it’s harder to pick a safe icon.

While simple, this game of skill does provide a fairer way to dealing with combat than a random dice roll, which in turn makes survival a much more fair proposition. It’s good to see. Laughing Jackal has done a good job of tweaking the source material just enough to make a gamebook that feels just that bit more relevant in the world of PlayStation Minis, without changing things enough to risk offending the players.

Hopefully there are more to come, though it would be nice to see the developers take their obvious talent and passion for the source material and apply it to a platform better suited to gamebooks next time.